These interesting quotes about good intentions are a great way to show, that whilst intentions can be ‘good’, it’s important to ensure that actions and behaviors also match up.

Intentions are best described as a plan or a purpose to do something.

When we consider people’s behavior, we tend to think of their ‘intent’ or their reason for doing or saying something. We might say that people have good or bad intentions – are they trying to be good or bad?

Generally, we could say that most people have good intentions in their heart, but often lack the actions and follow-through required to see it through fully.

There are many famous sayings about good intentions, such as:

“The road to hell is paved with good intentions.”

This saying really emphasizes the point that despite starting out with good intentions, they don’t really count if they are not followed through or if the actions don’t match the intentions.

A great thing about living intentionally, is to continuously consider how we think, feel and act and to make sure that it’s in line with where we want to go and how we want to be living.

We hope the following quotes inspire you and provide some food for thought.

“Our intentions may be very good, but, because the intelligence is limited, the action may turn out to be a mistake – a mistake, but not necessarily a sin, for sin comes out of a wrong intention.” E. Stanley Jones

“The evil that is in the world almost always comes of ignorance, and good intentions may do as much harm as malevolence if they lack understanding.” Albert Camus

“Hell isn’t merely paved with good intentions; it’s walled and roofed with them. Yes, and furnished too.” Aldous Huxley 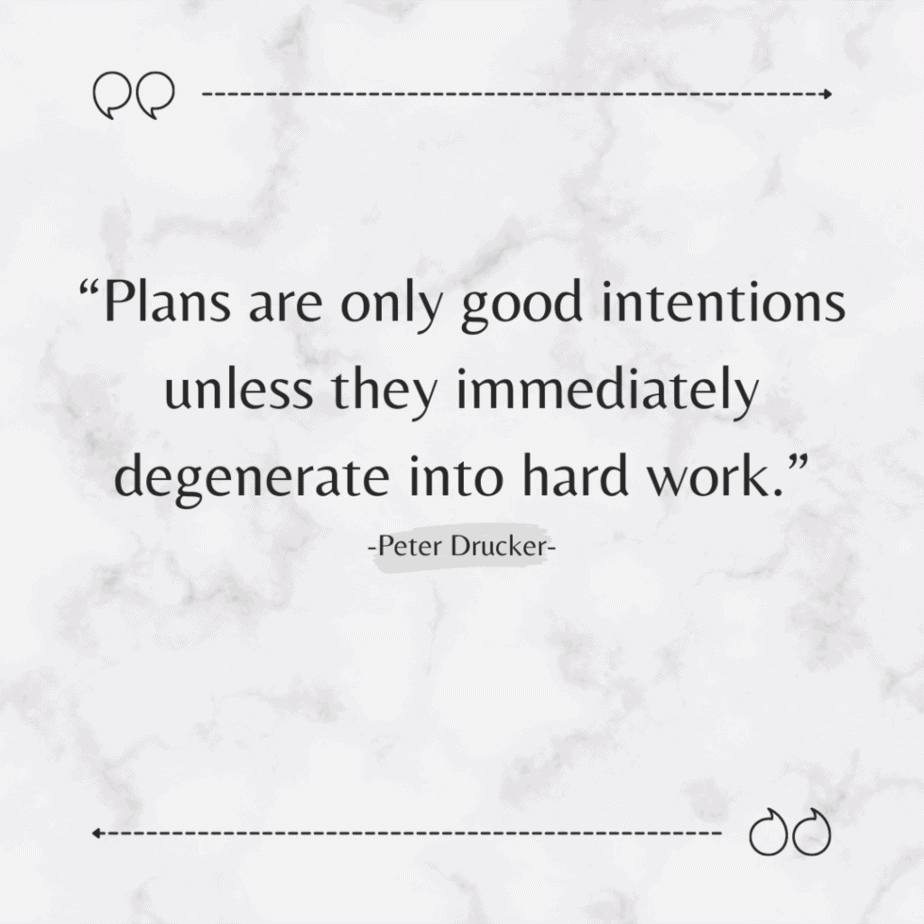 “Plans are only good intentions unless they immediately degenerate into hard work.” Peter Drucker

“No one would remember the Good Samaritan if he’d only had good intentions; he had money as well.” Margaret Thatcher

“We shall act with good intentions, but at times we will be wrong. When we are, let us admit it and try to right the situation.” Joe Paterno

“Early in life I learned, just through observation, that right always wins out over wrong. If a person has good intentions in his heart and wants to do the right thing, then there are certain ways that any obstacle can be overcome.” Monte Irvin 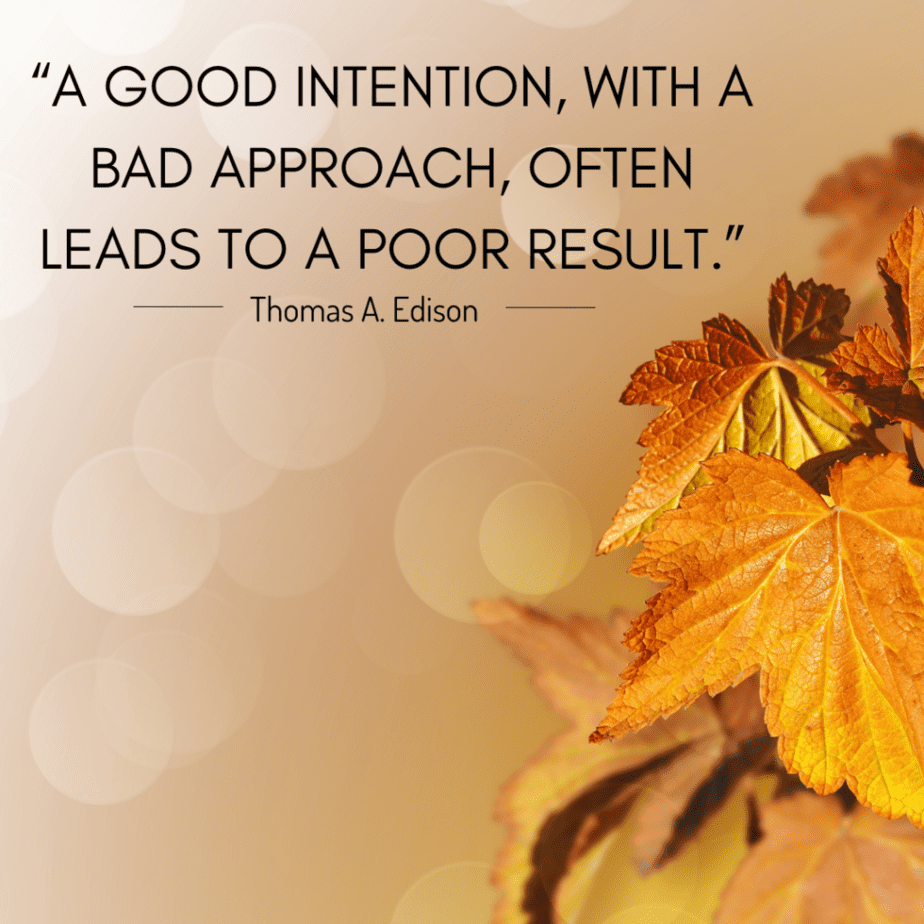 “A good intention, with a bad approach, often leads to a poor result.” Thomas A. Edison

“The really magical things are the ones that happen right in front of you. A lot of the time you keep looking for beauty, but it is already there. And if you look with a bit more intention, you see it.” Vik Muniz 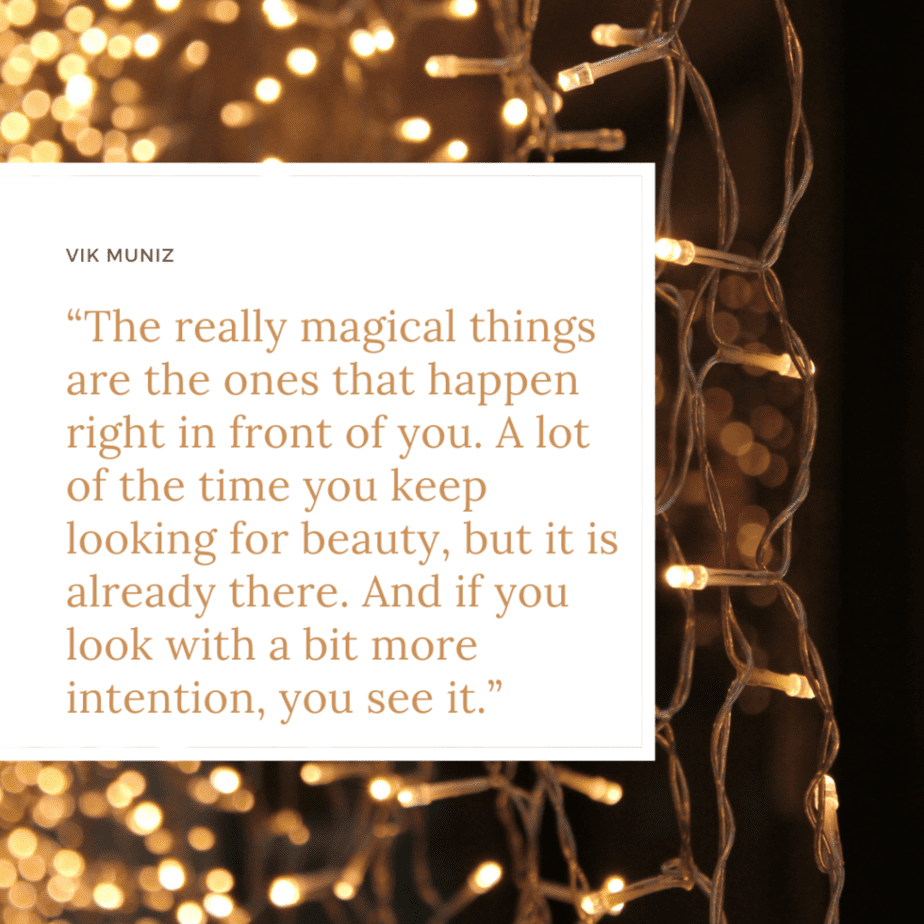 “I have a low tolerance for people who complain about things but never do anything to change them. This led me to conclude that the single largest pool of untapped natural resources in this world is human good intentions that are never translated into actions.” Cindy Gallop

“A garden requires patient labor and attention. Plants do not grow merely to satisfy ambitions or to fulfill good intentions. They thrive because someone expended effort on them.” Liberty Hyde Bailey

“Gratefulness helps us in focusing on the positive things in our lives rather than on the negative ones.” Pooja Agnihotri

“There are people who do what they believe is right, but as they say, ‘The road to hell is paved with good intentions.’” Aja Naomi King 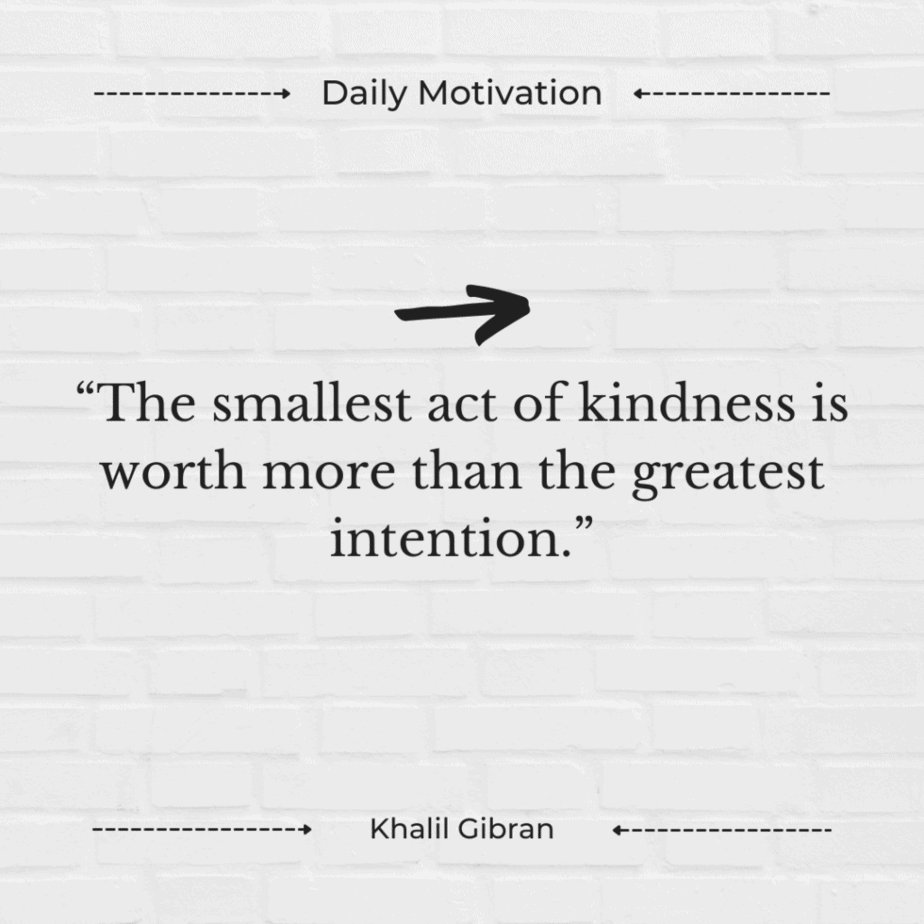 “The smallest act of kindness is worth more than the greatest intention.” Khalil Gibran

“Good intentions are simply not enough. Our character is defined, and our lives are determined not by what we want, say or think, but by what we do.” Michael Josephson

“As long as your intention is pure, and you know what you’re in it for, then you’re alright. And I’m in it because I enjoy it. I take it seriously… real seriously. I mean I could sit and talk all day about the music.” Trey Anastasio

“I’m a good guy with a good heart, and I have good intentions.” Antonio Brown

“I think every human being has good intentions in one aspect of life and some in every.” Mats Wilander

“We get so caught up in doing everything for ourselves, including inspiring ourselves, that it’s exhausting and not at all useful. Take a look around you. Look at your friends. Open up to your friends and take in the caring and good intentions they hold toward you.” Tara Stiles

“When things go wrong or don’t turn out the way you pictured them in your head, you just have to go with the best intentions defence. I have a lot of good intentions.” Blake Shelton

“I think I’ll be going to Heaven, because I had good intentions. But my actions are another thing.” Curtis Jackson

“Old habits eat good intentions for lunch. Change your habits so you can change your outcomes.” Darren Hardy

“Good intentions are not enough. They’ve never put an onion in the soup yet.” Sonya Levien 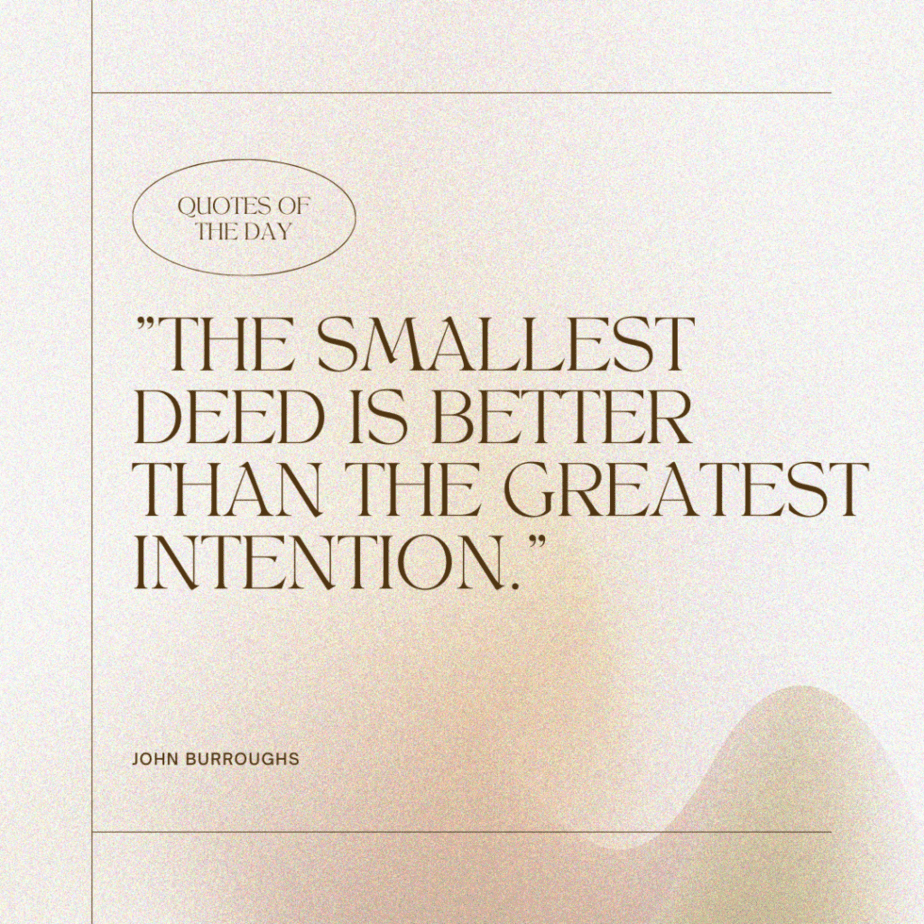 “The smallest deed is better than the greatest intention.” John Burroughs

“A gift consists not in what is done or given, but in the intention of the giver or doer.” Seneca

“I’m a big fan of intention. That’s because I have learned first-hand the power of setting my intention on my goal and making all decisions based off of that intention.”  Lewis Howes 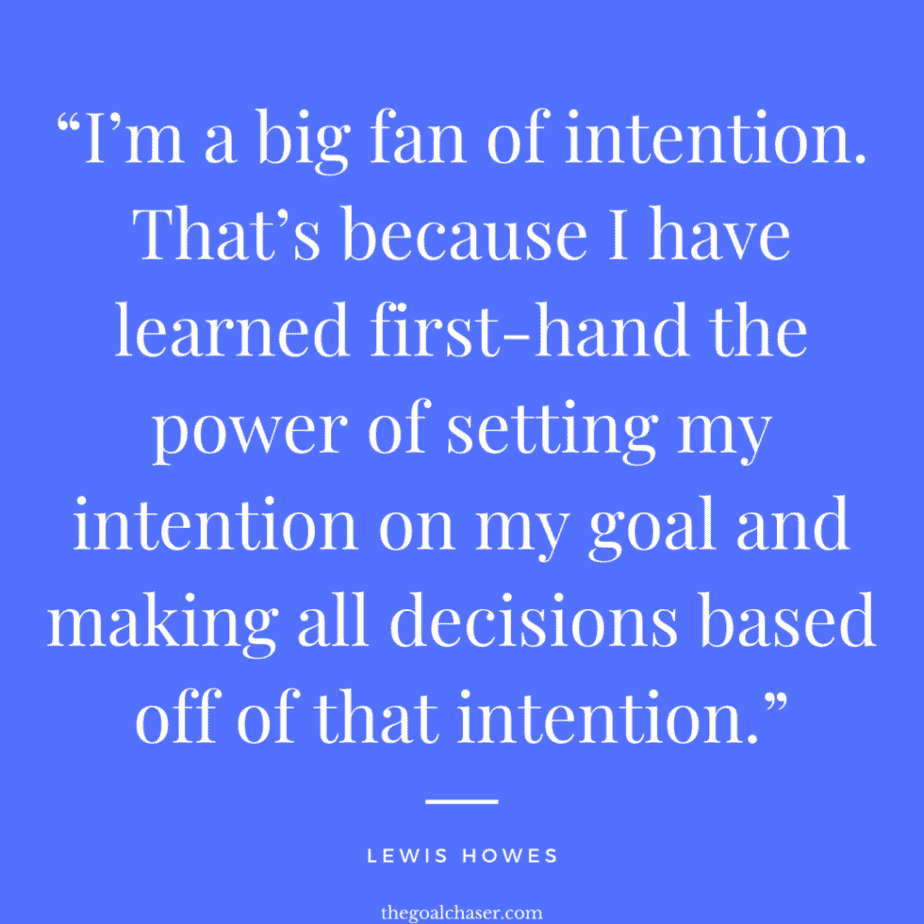 “All that counts in life is intention.” Andrea Bocelli

“The truth doesn’t lie. It’s up in your face. It’s in your conscience. It challenges your very being with the intention of cleaning you of sin and its influence.” Monica Johnson

“I don’t have any control over what actually happens except for that I have full control over my will for myself, my intention, and why I’m there.” SZA

“Sometimes, some things have to settle, and you have to think about the intention of it.” Edgar Wright

“Conversion is not my intention. Changing religion is not easy. You may develop some kind of confusion or difficulties.” Dalai Lama

“Honor thy error as a hidden intention.” Brian Eno

“Letters are something from you. It’s a different kind of intention than writing an e-mail.” Keanu Reeves

“Until you live every moment without assuming there will be another moment, then you’re not really living on purpose.” Bishop T.D. Jakes

“When you want to succeed as bad as you want to breathe, then you’ll be successful.” Eric Thomas

“You can’t go with the intention of writing something inspirational. You just have to go with the right heart.” Lights

“I’m very sensitive to the English language. I studied the dictionary obsessively when I was a kid and collect old dictionaries. Words, I think, are very powerful and they convey an intention.” Drew Barrymore

“The intention and outcome of vulnerability is trust, intimacy and connection. The outcome of oversharing is distrust, disconnection – and usually a little judgment.” Brene Brown

“No word is absolutely wrong or dirty or insulting. It all depends upon context and intention.” Janet Jackson

“Life is short and if you’re looking for extension, you had best do well. ‘Cause there’s good deeds and then there’s good intentions. They are as far apart as Heaven and Hell.” Ben Harper

“This is how to avoid re-creating painful situations: Take the time to discover your real intention before you act. If it is to change someone or the world so that you will feel safe or better about yourself, don’t act on it, because it is an intention of fear and can create only painful consequences.” Gary Zukav

“Let us not become so intense in our zeal to do good by winning arguments or by our pure intention in disputing doctrine that we go beyond good sense and manners, thereby promoting contention, or say and do imprudent things, invoke cynicism, or ridicule with flippancy.” James E. Faust 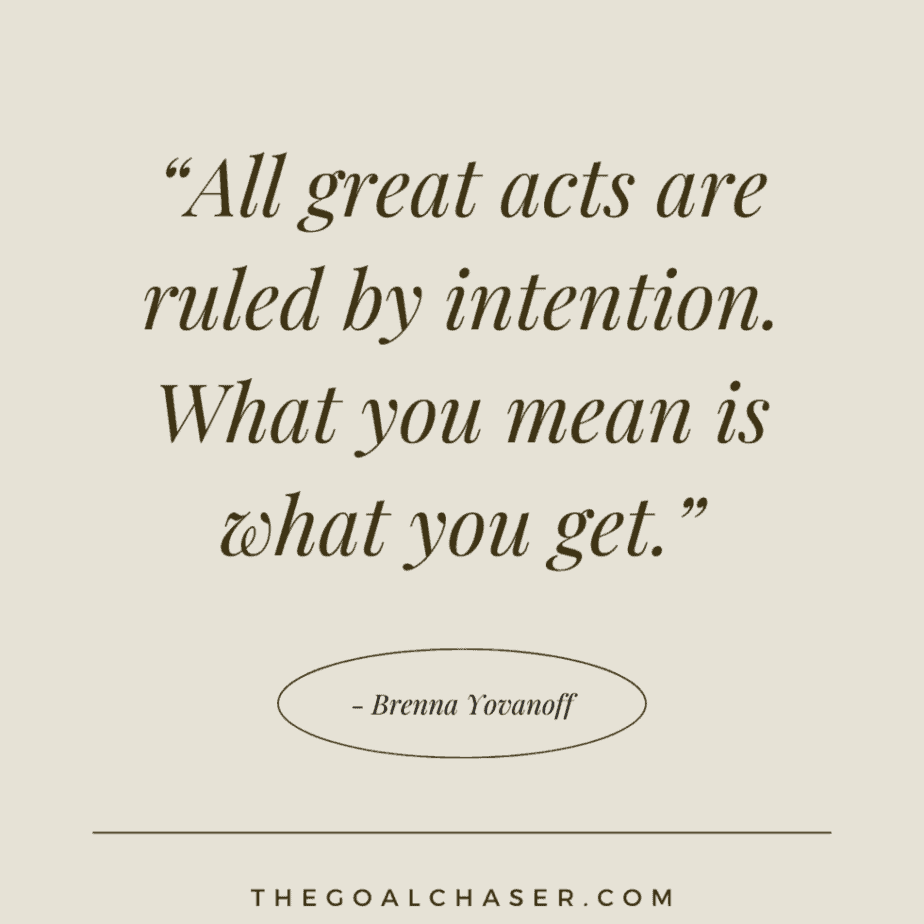 “All great acts are ruled by intention. What you mean is what you get.” Brenna Yovanoff

“Whoever benefits his enemy with straightforward intention that man’s enemies will soon fold their hands in devotion.” Henry Wadsworth Longfellow

“As any of us approaches middle age, we inevitably come up against our limitations: the realization that certain dearly held fantasies may not be realized; that circumstances have thwarted us; that even with intention and will we may not be able to set our ship back on the course we’d planned.” Claire Messud

“No word is absolutely wrong or dirty or insulting. It all depends upon context and intention.” Janet Jackson

“A truth that’s told with bad intent beats all the lies you can invent.” William Blake 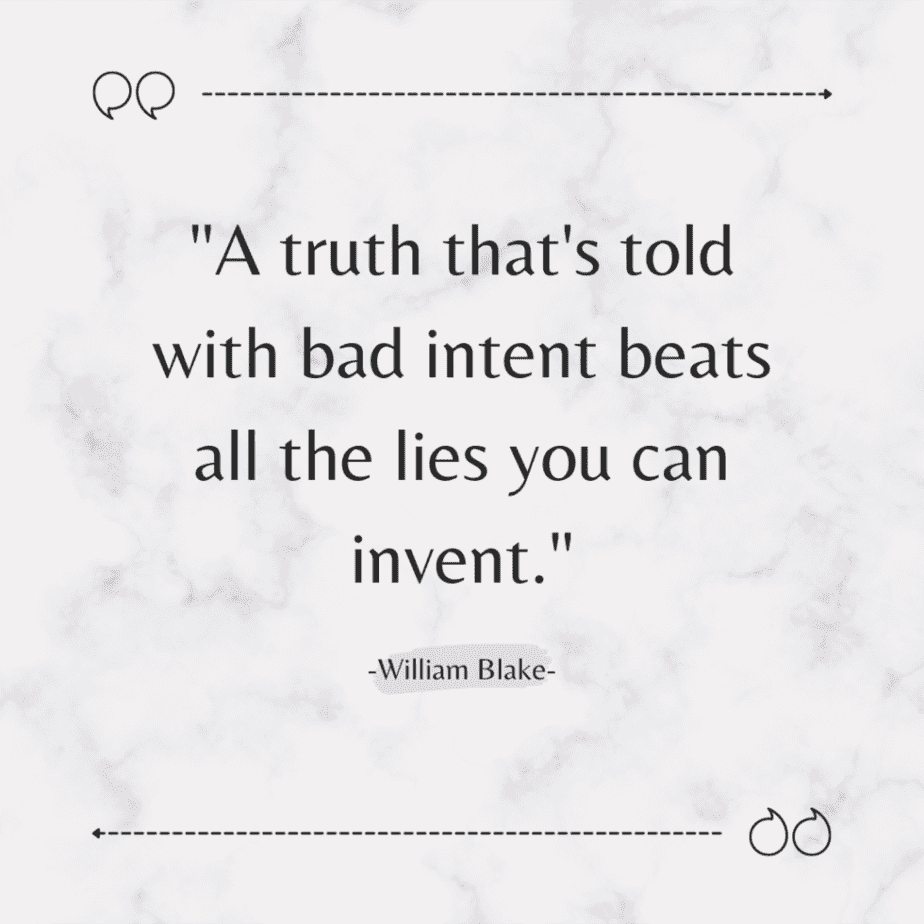 “Face the truth about what is standing in the way of your intention.” Shandel Slaten

“Don’t ascribe to evil what can be attributed to well-intentioned stupidity.” James A. Owen

“When you know your intention, you are in a position to choose the consequences that you will create for yourself. When you choose an intention that creates consequences for which you are willing to be responsible, that is a responsible choice.” Gary Zukav

“I think every religion is founded with good intentions, but with any good thing, there’s a negative use for it.” Daniel Caesar

If you’re interested in more inspirational quotes, be sure to check out: