The following collection of quotes on innovation are inspiring and insightful – helping to remind us why innovation is so important.

Innovation represents change or progress. A new way of doing things, a new product or service.

It’s the implementation of new ideas. Innovation is the creation of value through imagination, creativity, entrepreneurship and development – new things are created for society to benefit from.

If imagination is about conjuring up an idea that is currently ‘unrealistic’, creativity is the ability to realize this idea and innovation is about making this a reality.

Innovation is not just about what or how you create, but also why or for whom. It’s the power to put ideas into action, solve problems and improve things. Focusing on commercial success as well as societal value.

The following innovative quotes by the likes of Albert Einstein, Steve Jobs, Thomas Edison, JK Rowling (just to name a few) all highlight the importance of diversity to innovation, why innovation should be encouraged and the role of courage and creativity in the process.

We hope you find them inspiring.

“You can’t solve a problem on the same level that it was created. You have to rise above it to the next level.” Albert Einstein 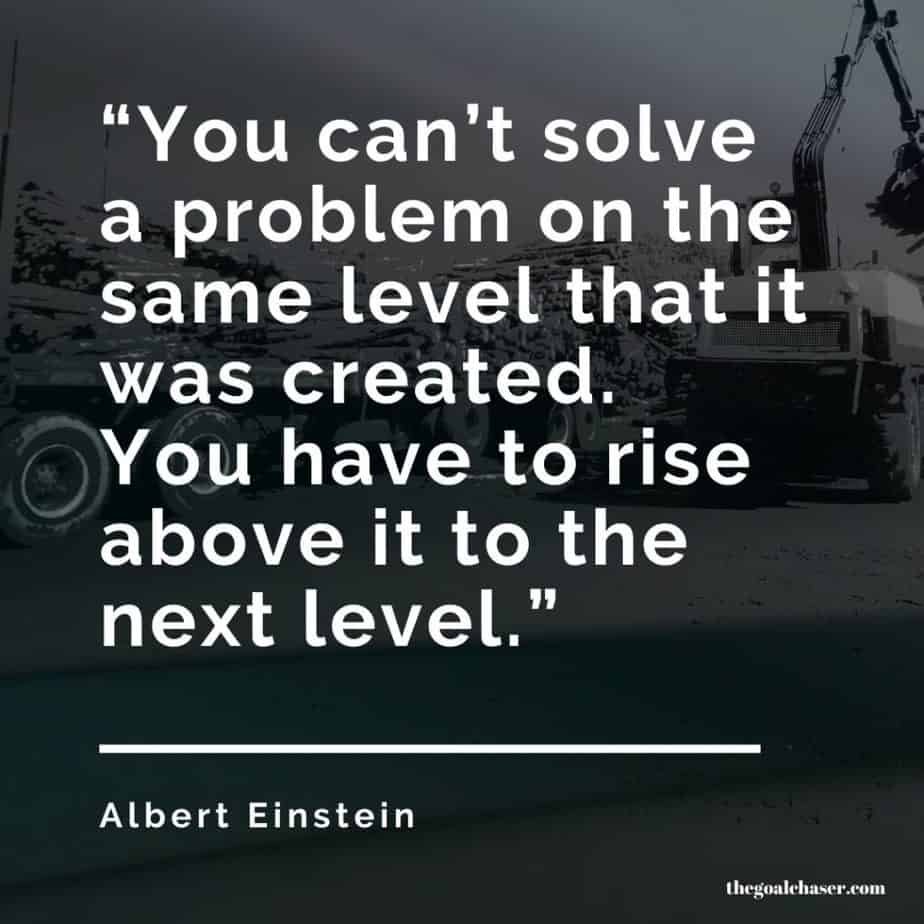 “There is no innovation and creativity without failure. Period.” Brene Brown

“What is now proved was once only imagined.” William Blake 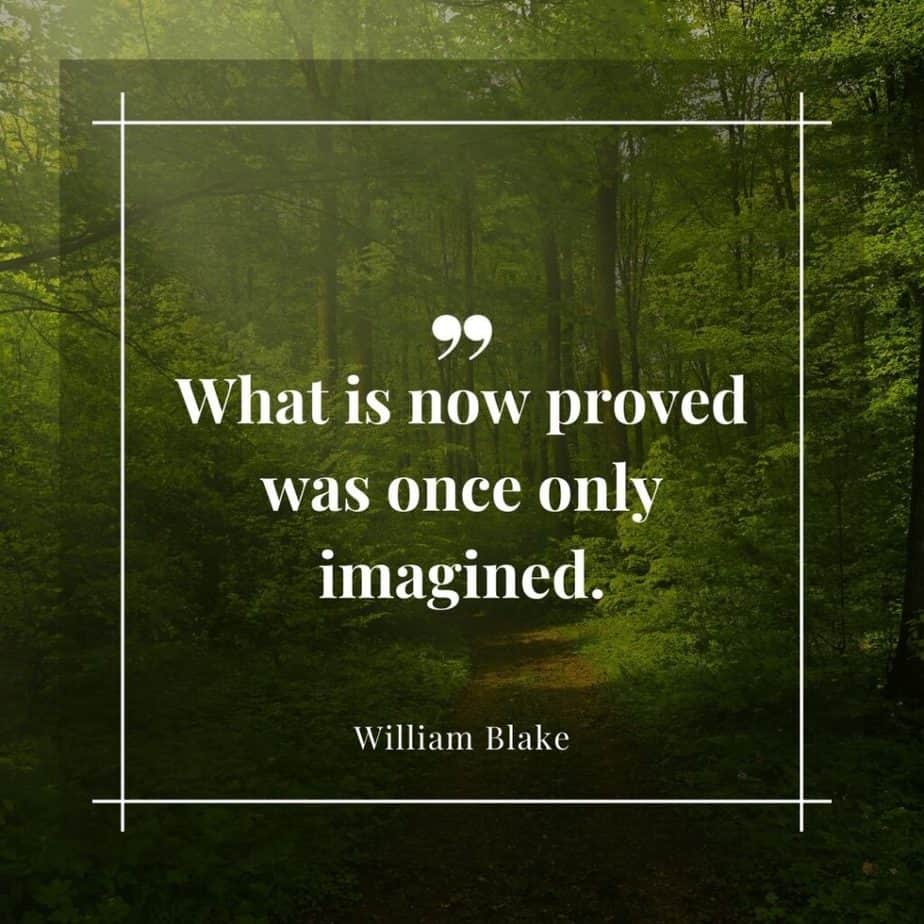 “Every once in a while, a new technology, an old problem, and a big idea turn into an innovation.” Dean Kamen 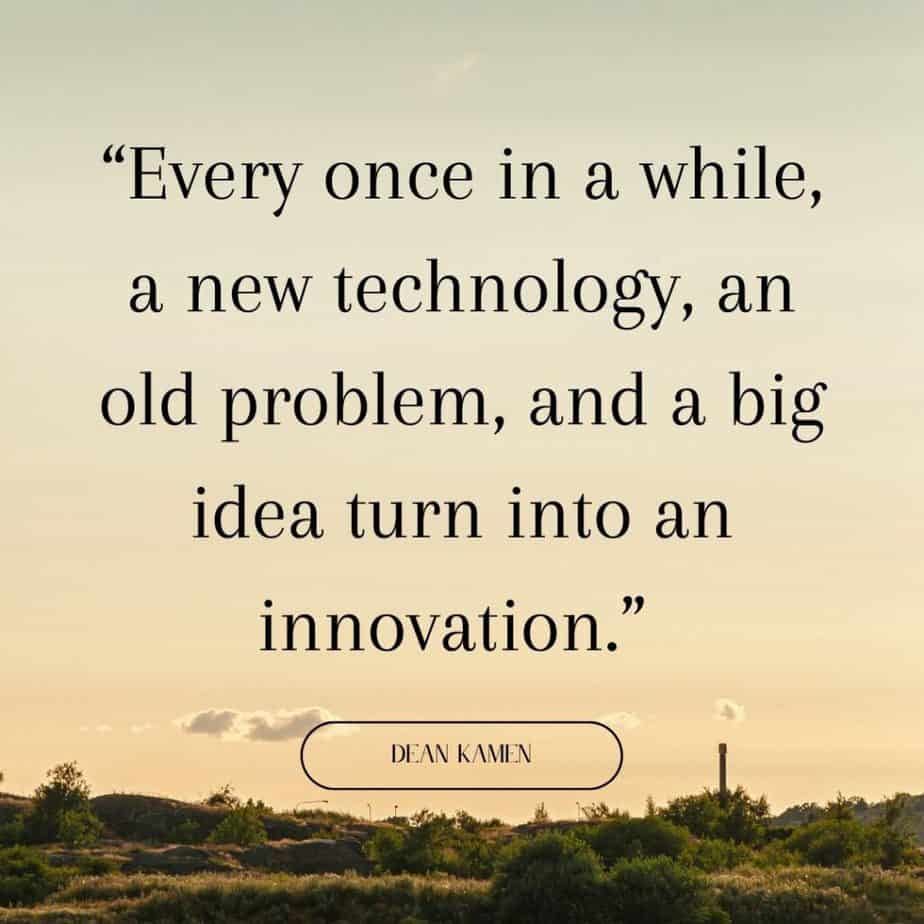 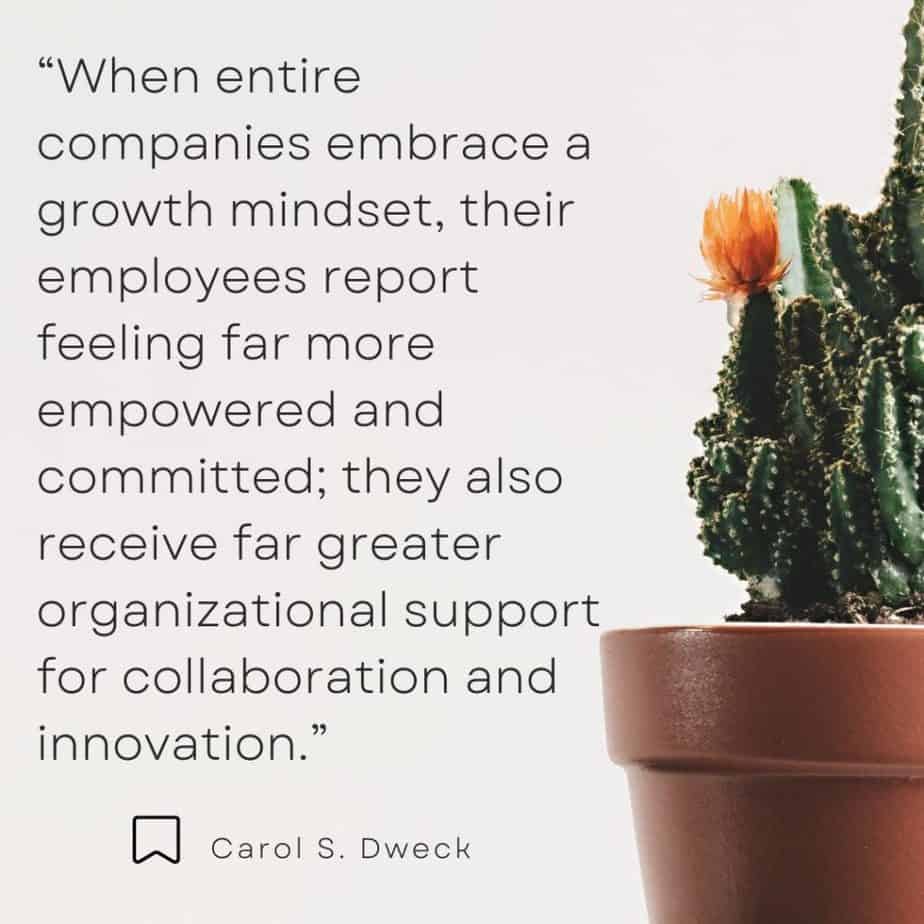 “Learning and innovation go hand in hand. The arrogance of success is to think that what you did yesterday will be sufficient for tomorrow.” William Pollard

“Cutting the deficit by gutting our investments in innovation and education is like lightening an overloaded airplane by removing its engine. It may make you feel like you’re flying high at first, but it won’t take long before you feel the impact.” Barack Obama

“Without tradition, art is a flock of sheep without a shepherd. Without innovation, it is a corpse.” Winston Churchill 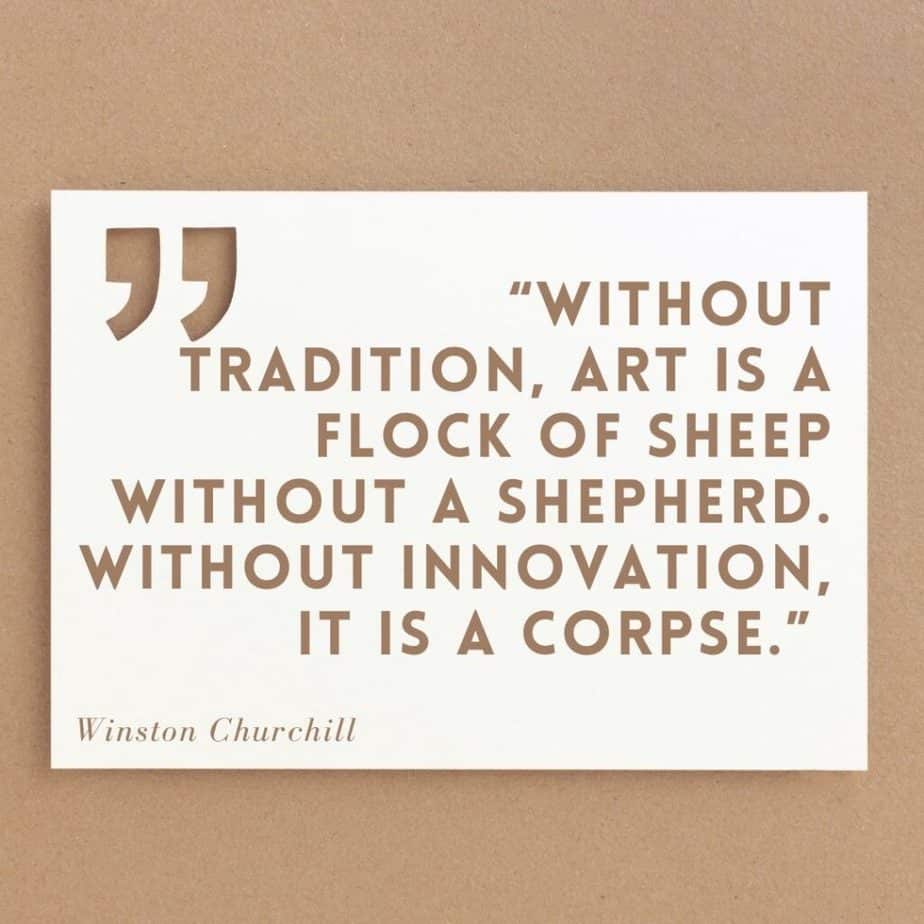 “I think frugality drives innovation, just like other constraints do. One of the only ways to get out of a tight box is to invent your way out.” Jeff Bezos

“Innovation is the calling card of the future.” Anna Eshoo

“You have all the reason in the world to achieve your grandest dreams. Imagination plus innovation equals realization.” Denis Waitley

“Innovation distinguishes between a leader and a follower.” Steve Jobs

“Imagination is not only the uniquely human capacity to envision that which is not, and therefore the fount of all invention and innovation. In its arguably most transformative and revelatory capacity, it is the power to that enables us to empathize with humans whose experiences we have never shared.” J. K. Rowling

“If you look at history, innovation doesn’t come just from giving people incentives; it comes from creating environments where their ideas can connect.” Steven Johnson

“Innovation is the ability to see change as an opportunity – not a threat.” Steve Jobs 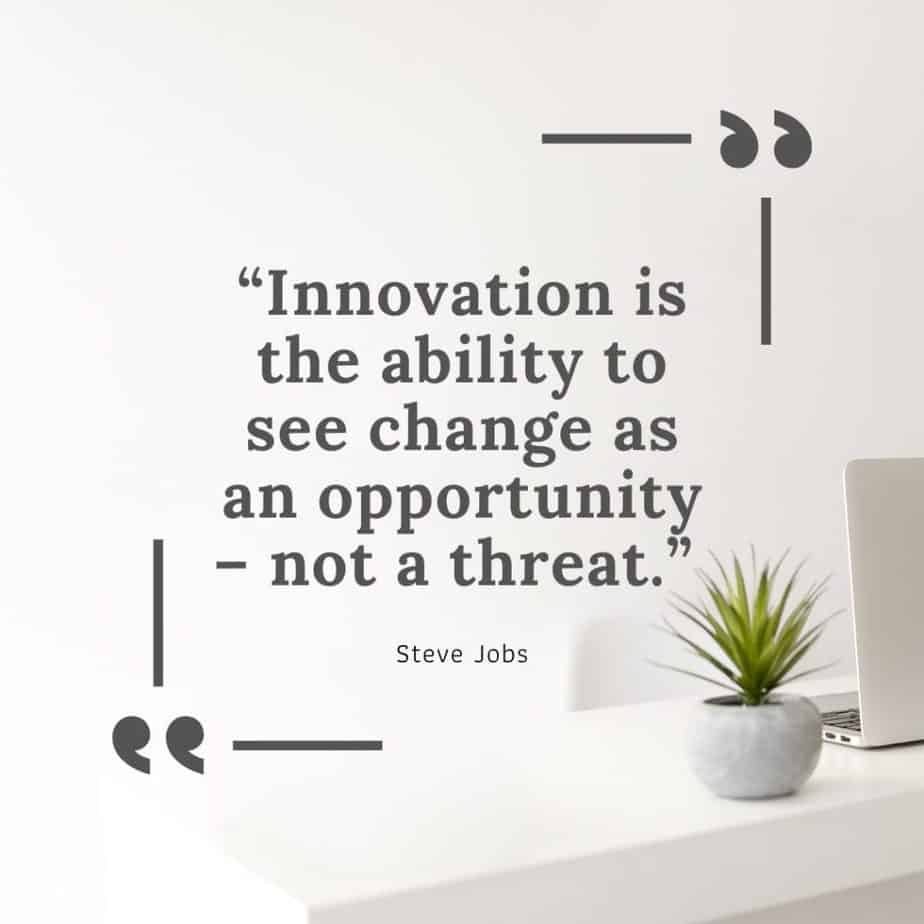 “I believe in innovation and that the way you get innovation is you fund research and you learn the basic facts.” Bill Gates

“With any advent in technology, any technological innovation, there is the good and the bad.” Henry Rollins

“New products, new markets, new investors, and new ways of doing things are the lifeblood of growth. And while each innovation carries potential risk, businesses that don’t innovate will eventually diminish.” Adena Friedman

“It is the essence of innovation to fail most of the time.” Astro Teller

“The only way to discover the limits of the possible is to go beyond them into the impossible.” Arthur C. Clarke 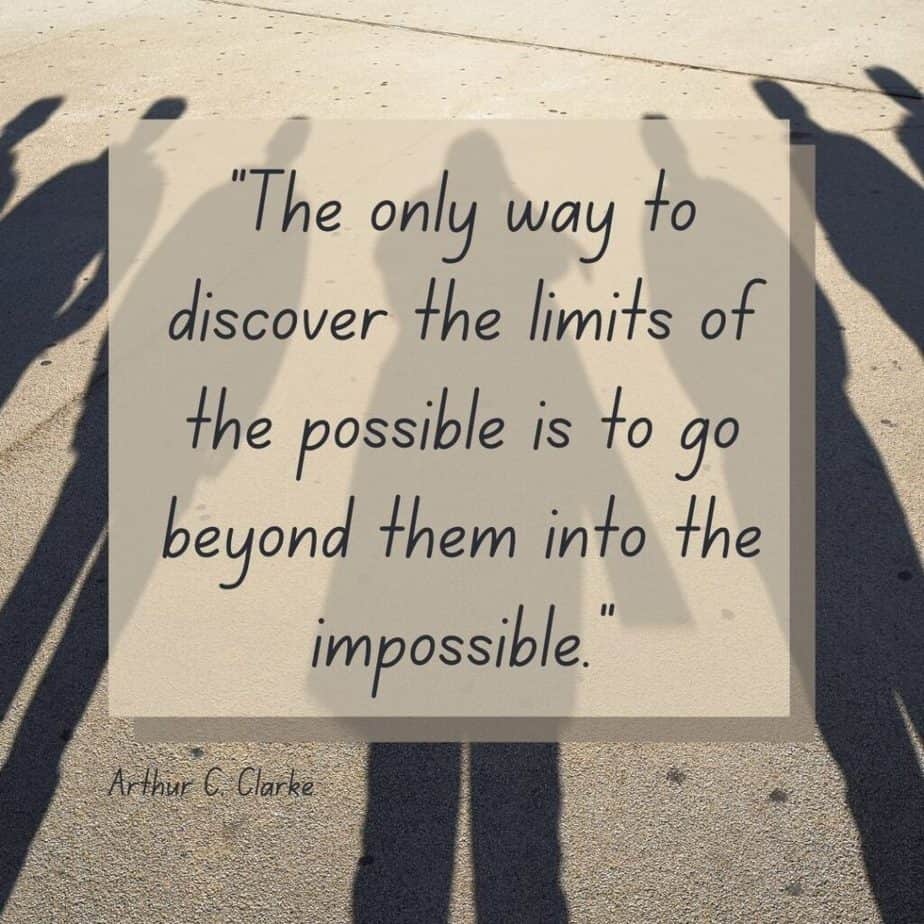 “You have to have a big vision and take very small steps to get there. You have to be humble as you execute but visionary and gigantic in terms of your aspiration. In the Internet industry, it’s not about grand innovation, it’s about a lot of little innovations: every day, every week, every month, making something a little bit better.” Jason Calacanis

“There’s the famous quote that if you want to understand how animals live, you don’t go to the zoo, you go to the jungle. The Future Lab has really pioneered that within Lego, and it hasn’t been a theoretical exercise. It’s been a real design-thinking approach to innovation, which we’ve learned an awful lot from.” Jorgen Vig Knudstorp

“If an organization values innovation, you can assume it’s safe to speak up with new ideas, leaders will listen, and your voice matters.” Adam Grant

“Taking bold action on climate change simply makes good business sense. It’s also the right thing to do for people and the planet. Setting a net-zero GHG emissions target by 2050 will drive innovation, grow jobs, build prosperity, and secure a better world for what will soon be 9 billion people.” Richard Branson

“There are different ways to do innovation. You can plant a lot of seeds, not be committed to any particular one of them, but just see what grows. And this really isn’t how we’ve approached this. We go mission-first, then focus on the pieces we need and go deep on them and be committed to them.” Mark Zuckerberg 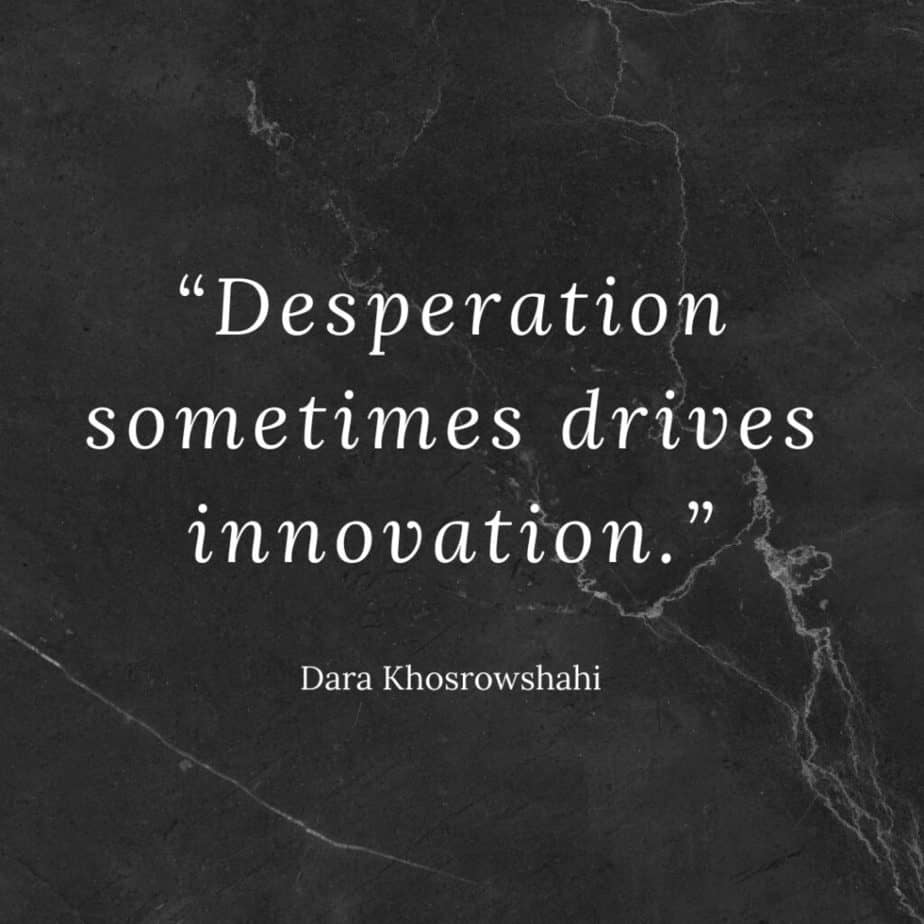 “Our wretched species is so made that those who walk on the well-trodden path always throw stones at those who are showing a new road.” Voltaire

“The reason why Silicon Valley is a worldwide innovation center is because it is an open culture that embraces diversity. You see people from all over the world. When you have many people from different backgrounds gathered together, that is where innovation comes from.” Eric Yuan

“Collaboration among individuals, brands, and industries will only continue to accelerate as technology facilitates and enables greater connection in real time from anywhere in the world. It’s why we’re experiencing such an unprecedented pace of innovation in every aspect of our lives.” Mark Parker

“In a world of change, the learners shall inherit the earth, while the learned shall find themselves perfectly suited for a world that no longer exists.” Eric Hoffer

For further related reading, be sure to check out: