This collection of quotes about imagination remind us of the importance and the power of imagination and creativity.

Imagination is the ability to form or envision things that are not real (not yet anyway).

It is a complex process that occurs in the brain, usually after exposure to something, like a thought, a conversation, a movie, a book or something else that impacts us and starts us off on a path of imagining.

Imagination is how we first create –  creation of our own worlds, stories from our past experiences, what we see going on around us and what we want for our futures.

Why is Imagination Important?

Imagination  is important, quite simply, because all great creations, innovations, new technologies and discoveries started with imagination.

A world without creativity, where no new ideas exist. Where everyone is confined to what already exists and nothing more.

Imagination gives us the capacity to dream of adventures, innovate, seek solutions to problems, create things, escape reality and be entertained.

The following quotes about imagination provide insight about the power of imagination and why it’s so important to a fulfilled life. We hope they inspire you, encourage you and have you thinking of all your possibilities!:

“I am enough of an artist to draw freely upon my imagination. Imagination is more important than knowledge. Knowledge is limited. Imagination encircles the world.” Albert Einstein 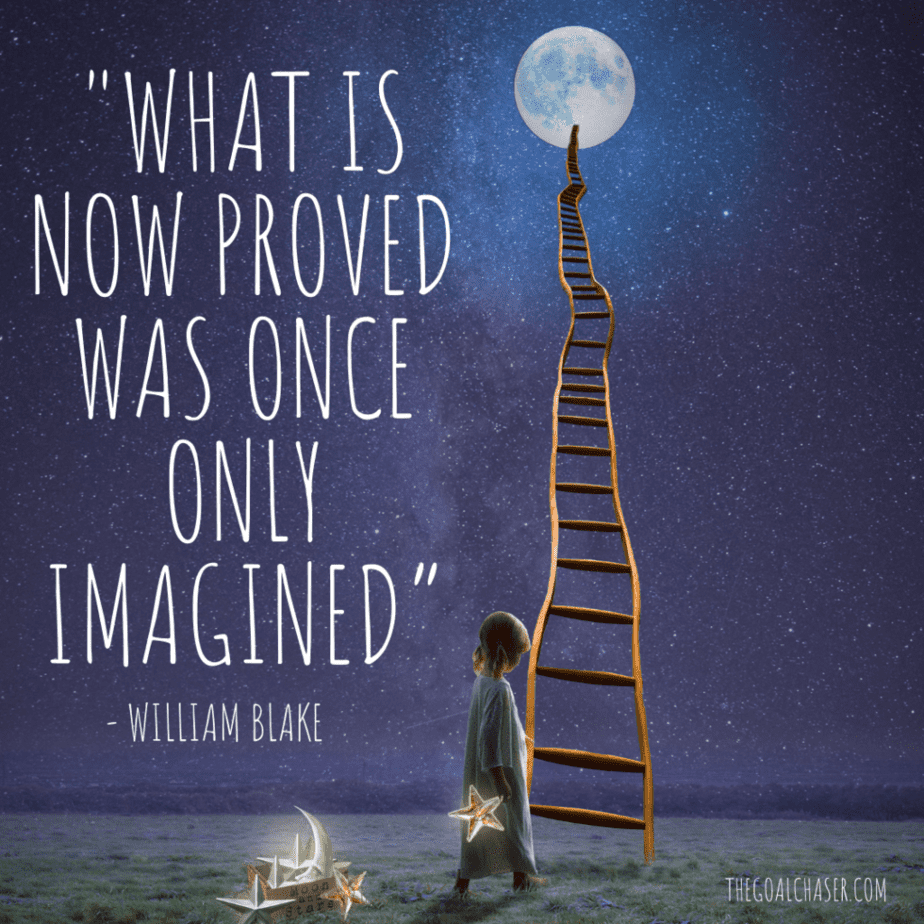 “What is now proved was once only imagined.” William Blake

“You can’t do it unless you can imagine it.” George Lucas

“Imagination is the only weapon in the war against reality.” Lewis Carroll

“Anyone who lives within their means suffers from a lack of imagination.” Oscar Wilde

“The man who has no imagination has no wings.” Muhammad Ali

“I saw the angel in the marble and carved until I set him free.” Michelangelo

“Our imagination flies – we are its shadow on the earth.” Vladimir Nabokov

“The power of imagination created the illusion that my vision went much farther than the naked eye could actually see.” Nelson Mandela

“The true sign of intelligence is not knowledge but imagination.” Albert Einstein

“Imagination is the beginning of creation. You imagine what you desire, you will what you imagine, and at last, you create what you will.” George Bernard Shaw

“Imagination is like a muscle. I found out that the more I wrote, the bigger it got.” Philip José Farmer

“The only limit to your impact is your imagination and commitment.” Tony Robbins

If imagination enables us to dream of the possibilities, it also drives us to be creative and think outside the box, pretty powerful really!:

“You never have to change anything you got up in the middle of the night to write.” Saul Bellow

“A well-composed book is a magic carpet on which we are wafted to a world that we cannot enter in any other way.” Caroline Gordon 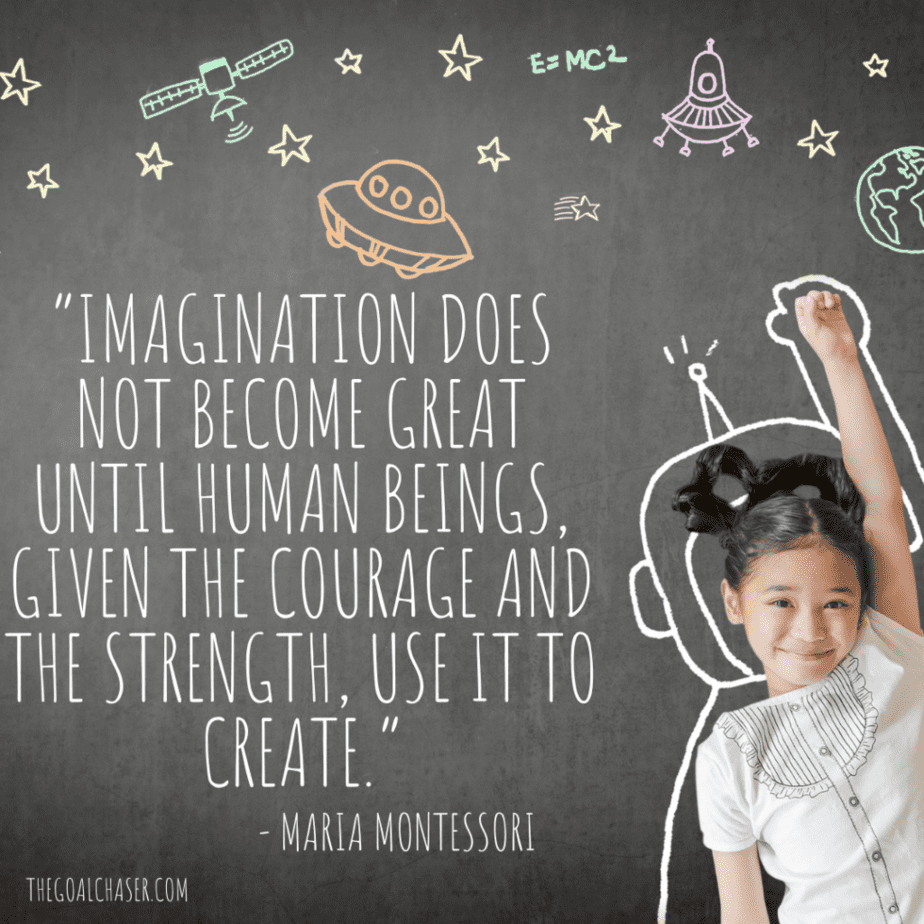 “Imagination does not become great until human beings, given the courage and the strength, use it to create.” Maria Montessori

“If I create from the heart, nearly everything works; if from the head, almost nothing.” Marc Chagall

“Imagination is the golden-eyed monster that never sleeps. It must be fed; it cannot be ignored.” Patricia A. McKillip

“Laughter is timeless, imagination has no age and dreams are forever.” Walt Disney

“There are painters who transform the sun to a yellow spot, but there are others who with the help of their art and their intelligence, transform a yellow spot into sun.” Pablo Picasso

Quotes On Creativity and Imagination

“I paint objects as I think them, not as I see them.” Pablo Picasso

“All men who have achieved great things have been great dreamers.” Orison Swett Marden

“The artist must bow to the monster of his own imagination.” Richard Wright

“Bring ideas in and entertain them royally, for one of them may be the king.” Mark Van Doren 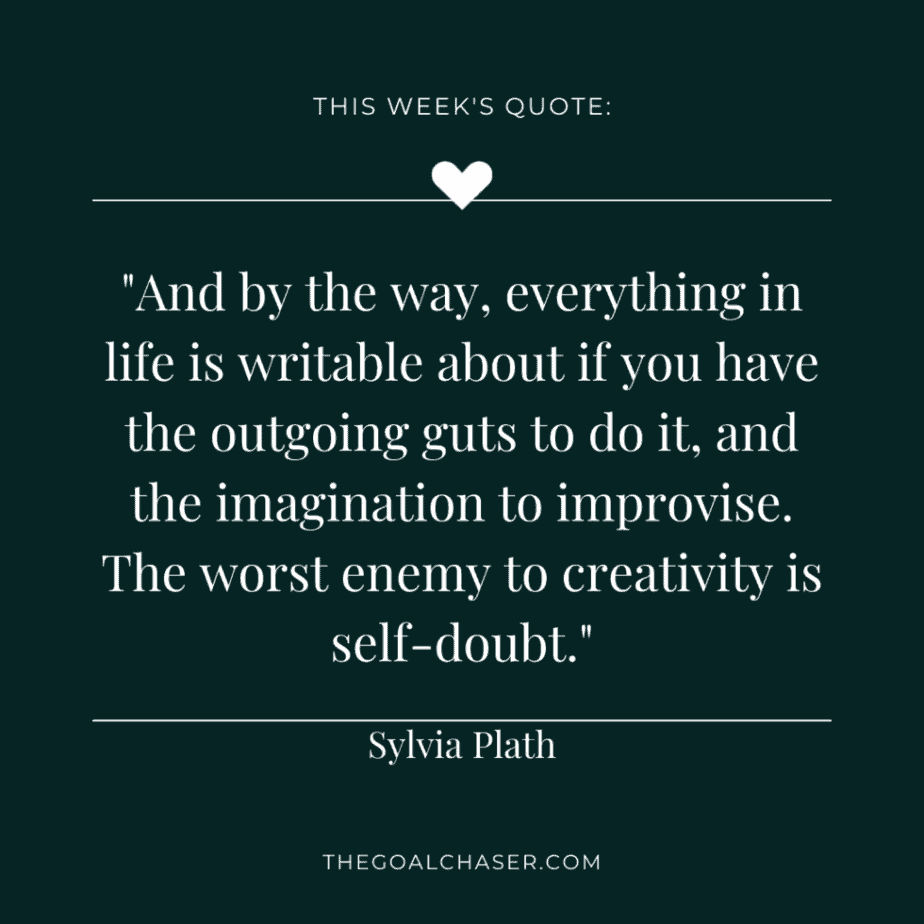 “And by the way, everything in life is writable about if you have the outgoing guts to do it, and the imagination to improvise. The worst enemy to creativity is self-doubt.” Sylvia Plath

“A rock pile ceases to be a rock pile the moment a single man contemplates it, bearing within him the image of a cathedral.” Antoine de Saint-Exupery

“Those who do not want to imitate anything, produce nothing.” Salvador Dali

“Trust that little voice in your head that says, ‘Wouldn’t it be interesting if…’; And then do it.” Duane Michals

“Every block of stone has a statue inside it, and it is the task of the sculptor to discover it.” Michelangelo 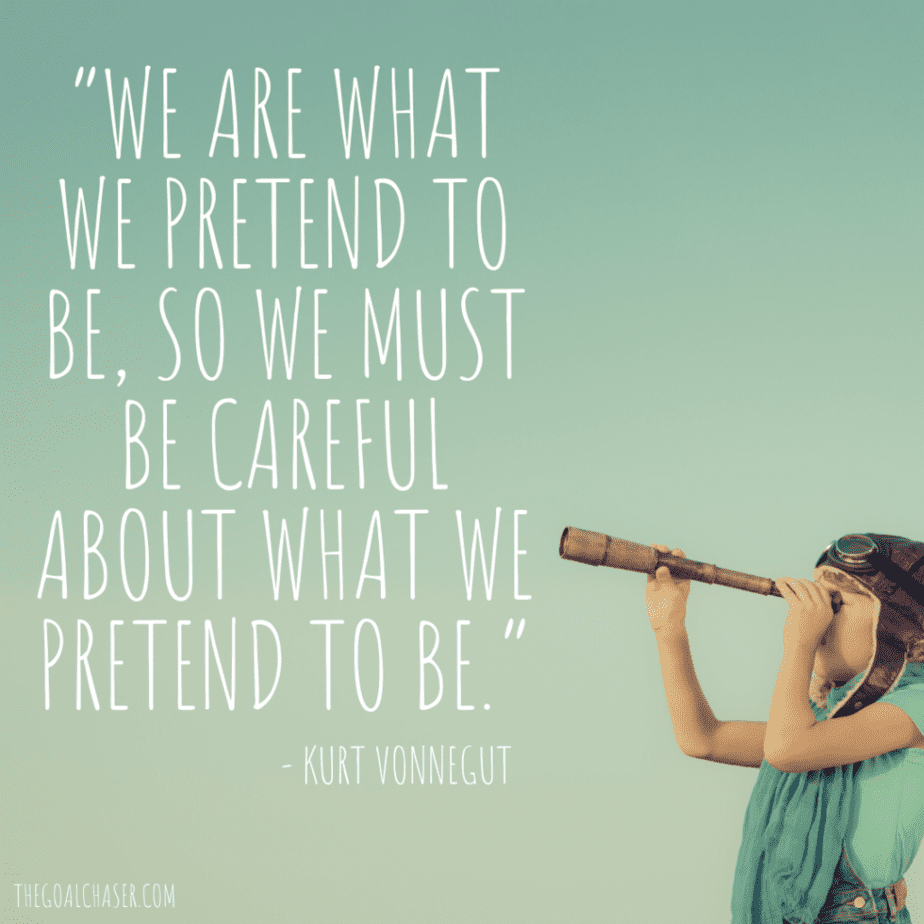 “Imagination will often carry us to worlds that never were, but without it we go nowhere.” Carl Sagan

“The visionary starts with a clean sheet of paper and re-imagines the world.” Malcolm Gladwell

“Imagination is everything. It is the preview of life’s coming attractions.” Albert Einstein

“Vision is the art of seeing things invisible.” Jonathan Swift

“You can’t depend on your eyes when your imagination is out of focus.” Mark Twain

“Everything you can imagine is real.” Pablo Picasso

“The moment you doubt whether you can fly, you cease for ever to be able to do it.” J. M. Barrie (Peter Pan)

“We are more often frightened than hurt, and we suffer more from imagination than from reality.” Seneca

“Children see magic because they look for it.” Christopher Moore 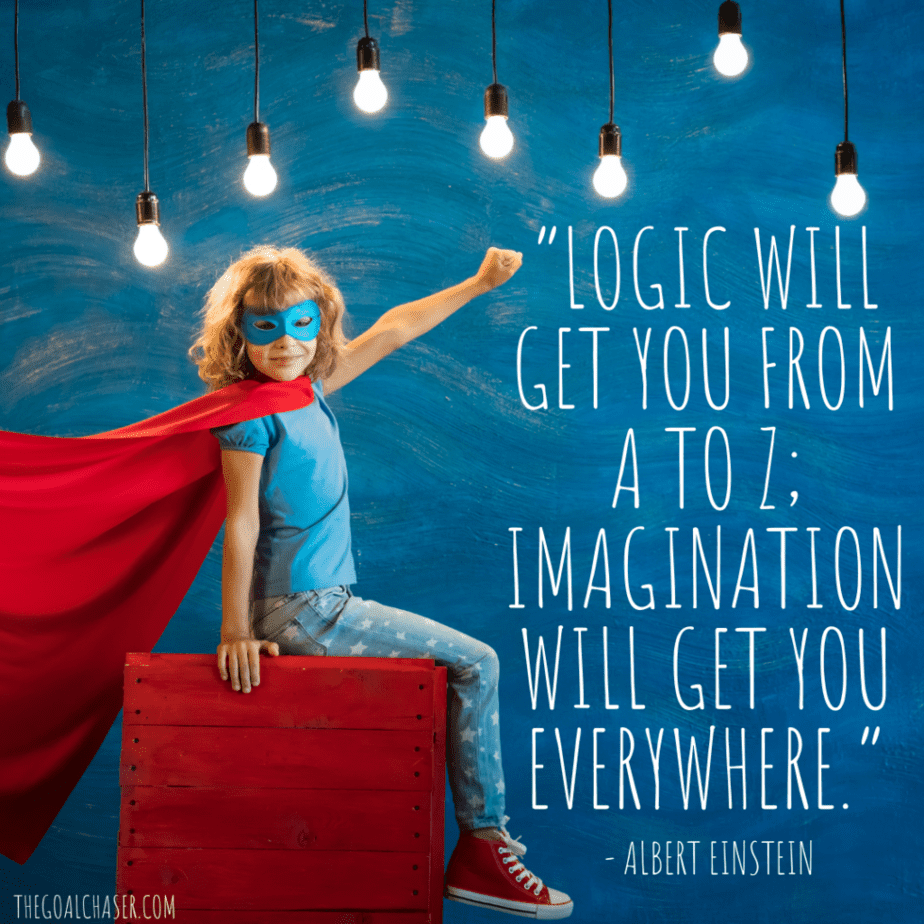 “Limitations live only in our minds. But if we use our imaginations, our possibilities become limitless.” Jamie Paolinetti

“Visualize this thing that you want, see it, feel it, believe in it. Make your mental blueprint, and begin to build.” Robert Collier

“Stories of imagination tend to upset those without one.” Terry Pratchett

“You have many years ahead of you to create the dreams that we can’t even imagine dreaming. You have done more for the collective unconscious of this planet than you will ever know.” Steven Spielberg

“My imagination functions much better when I don’t have to speak to people.” Patricia Highsmith 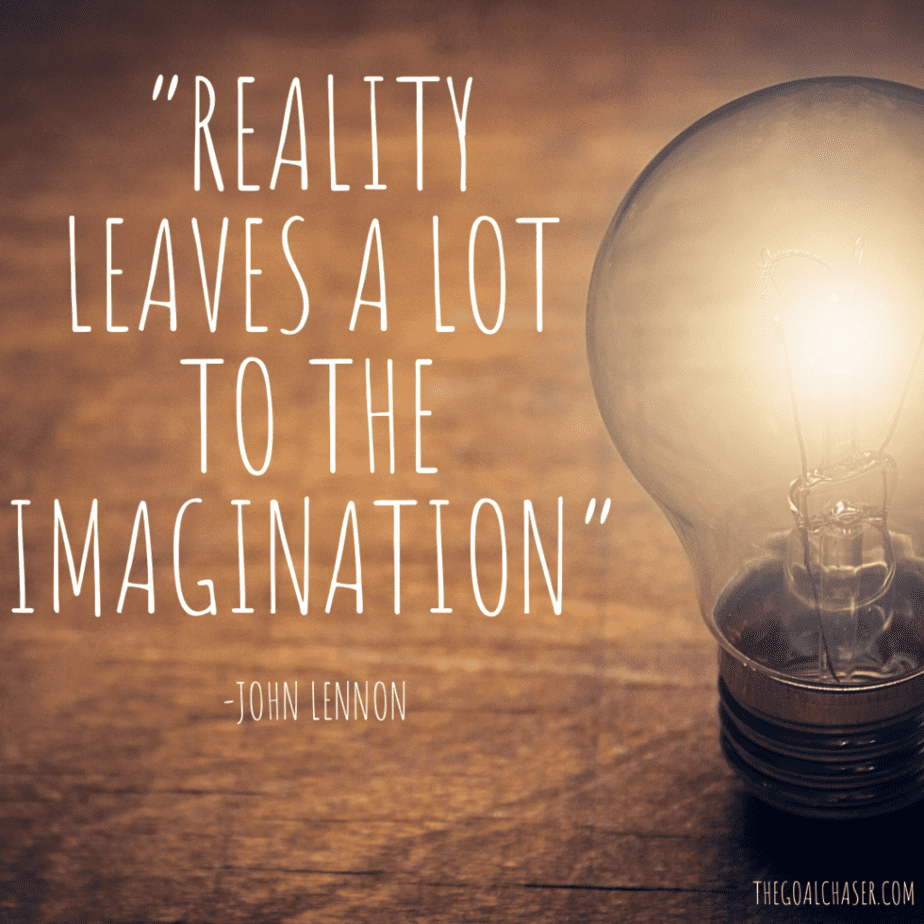 “Reality leaves a lot to the imagination.” John Lennon

“I have too much imagination to be a housewife.” Marilyn Monroe

“I only hope that we don’t lose sight of one thing – that it was all started by a mouse.” Walt Disney

If you’re interested in more inspiring quotes and positive words to stimulate imagination and creativity, be sure to check out: