We have pulled together an enormous list of bad, or negative words that all start with the letter I.

These words range from ‘insufferable’ and ‘insularity’, to ‘intimidation’ and ‘injustice’. Each of the words on this list comes with its own definition, so you can gain a better understanding of how they might be used.

You can also use this information to help you avoid using these words yourself and gain a better understanding of how language can be used for negative or positive effects.

We hope that this list will provide a helpful resource in your quest to become more aware of the power of language. 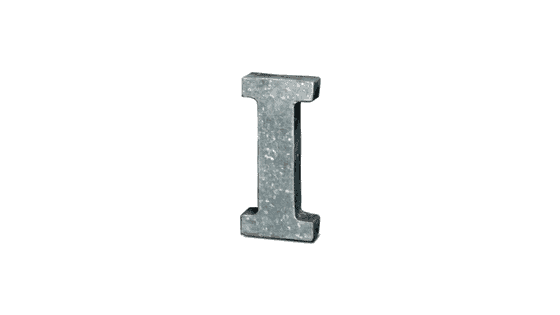 Idiot: someone who is extremely foolish or stupid.

Idle: lazy; having no purpose or being unproductive.

Ignoble: lacking honor or nobility; not worthy of respect.

Ignoramus: An insulting term for someone who is considered to be very stupid or ignorant.

Ignorant: uninformed; lacking knowledge or understanding of a particular subject.

Ill-conceived: not thought through; unwise or foolish in conception or execution.

Illegal: against the law; prohibited by law.

Illegitimate: not recognized or accepted by law or society; not lawful, valid, or proper.

Ill-fated: having a bad outcome; doomed to failure or disaster.

Ill-natured: having a bad temper, spiteful, and quarrelsome; unkind and disagreeable.

Illness: a physical or mental disorder; a sickness of the body or mind.

Illogical: not having or based on logic; irrational and absurd.

Ill-tempered: having a bad temper; irritable and easily angered.

Imbalanced: unevenly distributed; disproportionate or out of order.

Imbroglio: a complicated or confused situation; an entanglement of difficulties.

Immature: not fully developed; childish and not appropriate for one’s age.

Immobile: unable to move; fixed in place and immovable.

Immoral: not moral or conforming with standards of right behaviour; immoral and wrong.

Immutable: not able to be changed or altered; immutable and unalterable.

Impaired: weakened or damaged; impaired by illness, injury, or an incapacity.

Impalpable: unable to be felt or perceived as tangible; intangible and not material.

Impasse: a situation in which no progress can be made; deadlock.

Impatient: having or showing a tendency to be quickly irritated or provoked.

Impede: to hinder or obstruct progress; to make something more difficult.

Impediment: a hindrance or obstruction; an obstacle or barrier.

Impenitent: not penitent or repentant; impenitent and unrepentant.

Imperfect: having flaws or defects; not perfect.

Impervious: not affected by something; unable to be penetrated or affected.

Impetuous: acting without thinking; rashly, impulsively, and without due caution.

Impiety: lack of reverence for God, religion, or sacred things;

Impinge: to have a strong effect or influence, especially in an unwelcome way; to intrude upon.

Implacable: unable to be appeased, calmed, or pacified; relentlessly persistent.

Implausible: not believable or credible; not likely to be true.

Impolite: not polite or courteous; rude and discourteous.

Impolitic: not sensible or wise; imprudent.

Imponderable: impossible to measure, calculate, or explain; unpredictable and mysterious.

Impostor: someone who pretends to be someone else; imposter and phony.

Impoverish: to make someone poor; to reduce a person’s wealth or resources.

Imprecation: calling down a curse upon someone or something; an invocation of evil.

Imprecise: not exact or accurate; imprecise and inexact.

Imprisoned: to confine or restrict someone within certain limits; to shut in, detain, or restrain.

Imprudent: not exhibiting caution or sound judgment; reckless and foolish.

Impudicity: lack of modesty or shame; shamelessness or immodesty.

Impugn: to attack someone’s character or reputation; to criticize strongly and publicly.

Impugnment: to call into question the truth or validity of something; to attack someone’s character.

Impulsive: acting on sudden urges without considering the consequences; rash and impetuous.

Impure: contaminated or tainted; not pure.

Inaccurate: not correct or exact; incorrect and inexact.

Inadequate: not enough or not suitable; insufficient and wanting.

Inadmissible: not allowed to be accepted, considered, or used as evidence in court.

Inadvertence: carelessness or negligence; an unintentional mistake or oversight.

Inalienable: not able to be taken away or denied; unassailable and absolute.

Inappropriate: not suitable or proper; improper and untimely.

Incapable: not able to do something; incapable and incompetent.

Incapacitate: to render someone unable to act in the usual way; to disable them.

Incarcerate: to keep someone in prison; to imprison and confine.

Incendiary: Causing great destruction by fire; incendiary language can be inflammatory and divisive.

Inchoate: just begun and not fully formed; in the early stages of development.

Incoherence: lack of clarity or intelligibility; speech that is disjointed and hard to understand.

Incompatible: not able to coexist peacefully; unable to exist together harmoniously.

Incompetence: a lack of qualifications or ability; ineptitude.

Incompetent: lacking the necessary skills to do something; incompetent and inadequate.

Incomplete: lacking something necessary; not finished or whole.

Inconceivable: impossible to imagine or believe; beyond imagination.

Inconclusive: not providing a definite answer or solution; no definite result.

Incongruity: the state of being incompatible, incongruous, or at odds; a lack of harmony.

Incongruous: lacking consistency and harmony; inappropriate and out of place.

Inconsiderate: showing no care or thought for the feelings of others; inconsiderate and thoughtless.

Inconsistent: not in agreement with what was said before; not steady or regular.

Inconstancy: a lack of consistency; frequent changes in feelings, attitude, or behavior.

Incorrect: not correct or accurate; incorrect or wrong.

Incorrigible: not able to be corrected, reformed, or improved; persistent in wrongdoing.

Incredulity: disbelief or suspicion; a lack of trust or confidence in something.

Incredulous: not believing; skeptical and doubtful.

Incuriosity: lack of interest in learning or knowledge; disinclination to investigate or discover.

Indecisive: unable to make up one’s mind; vacillating and irresolute.

Indefensible: unable to be justified or defended; wrong under all circumstances.

Indelible: not able to be erased or forgotten; indelible and unforgettable.

Indelicacy: the quality of being rude or indecent; an offensive act or statement.

Indigence: extreme poverty, which is characterized by a lack of material possessions or resources.

Indiscreet: showing a lack of caution or prudence; indiscreet and ill-advised.

Indolence: the quality of being lazy;

Indomitable: unconquerable; unable to be subdued or overcome.

Inebriation: the state of being drunk or intoxicated.

Ineffable: too great or extreme to be expressed in words; unutterable or indescribable.

Ineffective: not producing a desired or intended effect; powerless and inoperative.

Inefficient: not working or producing results as desired; inefficient and unproductive.

Ineligible: not qualified to do or receive something; ineligible and unqualified.

Inept: lacking the necessary skills to do something; clumsy and unskillful.

Inert: unable to move or act; lethargic and sluggish.

Inexcusable: not able to be justified or forgiven; inexcusable and indefensible.

Inexorable: relentless, unyielding, and unable to be stopped or diverted from a course

Infamous: having a very bad reputation; infamous and notorious.

Infamy: notoriety from a shameful act; dishonor and public disgrace.

Infectious: tending to spread from one person or thing to another; contagious and infectious.

Inferior: of lower quality or value; inferior and second-rate.

Inflexible: not able to be changed or adapted; inflexible and unyielding.

Infringe: to violate or transgress; infringe and breach.

Ingenuous: naïve and trusting to a fault; unsophisticated and easily deceived.

Ingrate: an ungrateful person; showing no appreciation or gratitude.

Inimical: hostile, antagonistic, and unfriendly; harmful or detrimental to someone.

Injustice: something that is unfair; injustice and inequity.

Inordinate: exceeding what is normal or reasonable; excessive and unreasonable.

Inordinately: to an excessive degree; excessively and unduly.

Inscrutability: the quality of being impossible to understand or interpret; mysteriousness.

Inscrutable: difficult to comprehend or understand; impenetrable and mysterious.

Insensate: lacking feeling or sense; senseless and not rational.

Insensibility: an inability to feel emotion, physical sensation, or pain.

Insensible: not able to be perceived by the senses; insensible and imperceptible.

Insensitive: not sensitive or aware; insensitive and callous.

Insidious: crafty and sly; dangerous but subtle or hidden.

Insidiousness: crafty and sly; dangerous but subtle or hidden.

Insincere: not genuine or honest; insincere and disingenuous.

Insinuate: To imply something without stating it directly; often used to spread rumors and lies.

Insoluble: not able to be solved or resolved; insolvent and intractable.

Insolvency: the inability of a person to pay their debts; financial bankruptcy.

Insolvent: unable to pay debts as they come due.

Insomnia: the inability to sleep; a chronic condition of restlessness and wakefulness.

Insouciance: a lack of care or concern; indifference combined with nonchalance.

Instability: the quality of being unpredictable or changing quickly; instability and volatility.

Insufferable: too unpleasant or intolerable to endure; insufferable and unbearable.

Insular: narrow in outlook; detached or isolated from others.

Insularity: the state of being isolated or disconnected from the outside world.

Insulting: saying something rude or offensive to someone; insulting and demeaning.

Insurgency: an uprising against authority; insurgency and revolt.

Insurgent: rebelling against lawful authority; involved in insurrection or rebellion.

Insurmountable: not able to be overcome, conquered, or surmounted; unsurpassable.

Insurrection: a violent uprising against an established government or authority.

Interfere: to get involved in something without permission; intervene and meddle.

Intemperance: excessive indulgence in something, especially alcohol; lack of moderation.

Intemperate: uncontrolled or excessive in something, especially alcohol; lack of moderation.

Interdiction: an act of forbidding something; an authoritative prohibition or proscription.

Interloper: An intruder or unwelcome visitor.

Intimidate: To make someone feel afraid or threatened.

Intimidation: making someone afraid by using threats or violence.

Intolerable: not able to be endured; intolerable and unbearable.

Intolerance: an unwillingness to accept and respect the beliefs and practices of others.

Intolerant: unwilling to accept views, beliefs, or behaviors different from one’s own.

Intractable: difficult to control or manage; unmanageable and stubborn.

Intransigence: stubbornness and refusal to compromise or change one’s opinion.

Intrusive: entering or interfering without permission; intrusive and meddling.

Inundate: to overwhelm or flood; inundate and deluge.

Inured: hardened or toughened against feeling pain, hardship, or distress; accustomed to something unpleasant.

Inutile: having no useful purpose; futile.

Inveigle: to persuade someone to do something through deception or flattery.

Inveterate: deeply rooted in someone; stubbornly persistent and difficult to eliminate.

Inviolable: not able to be broken or disregarded; inviolate and indisputable.

Invisible: something that cannot be seen.

Irascibility: having a tendency to become easily angry; irritability and hot temper.

Irrational: not logical or reasonable; lacking a sound basis in fact.

Irreconcilable: incapable of being resolved or settled; incompatible with one another.

Irredeemable: not able to be saved, improved, or corrected; beyond redemption.

Irrelevant: not connected to the subject

Irremediable: not able to be remedied; beyond repair or redemption.

Irreparable: not able to be fixed or repaired; irreparable and unfixable.

Irresponsible: careless and lacking in accountability; failing to fulfill obligations or duties.

Irreverence: a lack of respect or proper regard; showing contempt or disregard.

Irrevocable: not able to be changed or reversed; irreversible and definite.

Irruption: a sudden and violent outbreak, especially into a place; an invasion or intrusion.

Isolate: to separate or set apart from others; to keep away from others. 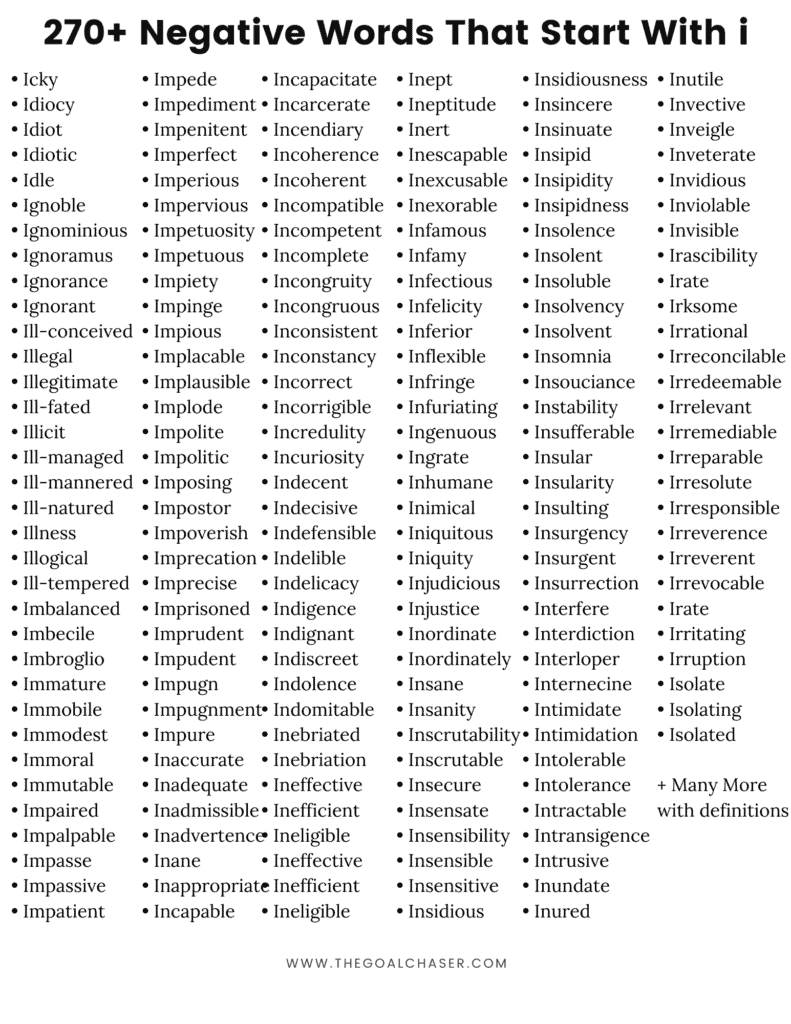 Negative words can be hurtful, damaging, and divisive, so it’s best to be aware of them when communicating with others and strive to use more positive language. For more word lists, be sure to check out: