Home » Positive Words » Negative Words That Start With A (With Definitions)

Negative words are an important part of any language, as they enable us to express our negative emotions, actions and ideas in a more precise way.

From affront to avarice, there are numerous words that begin with A that can be used to accurately describe experiences or concepts with a negative connotation.

Whether it’s expressing aggression, animosity, apprehension or aversion, there is sure to be the right word to get your point across. 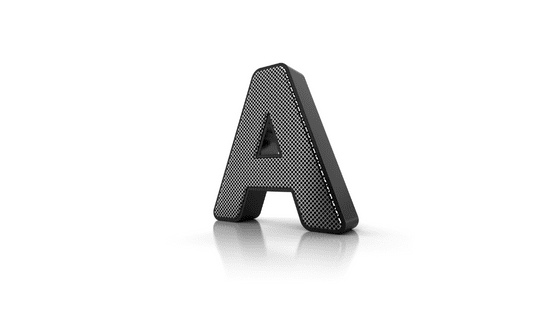 Abdicate: To give up all power, authority or responsibilities.

Abdication: The act of surrendering power, authority or responsibility.

Aberrant: Deviating from what is normal, expected or acceptable.

Abhor: To strongly dislike or detest something or someone.

Abnegation: Self-denial in the pursuit of a higher goal or principle.

Abomination: Something that causes extreme disgust or revulsion.

Abrasive: Rough or harsh in manner or disposition; irritating.

Abrogate: To revoke, annul or repeal a law, treaty, or other binding agreement.

Abscond: To leave secretly and hide, often to avoid legal trouble or arrest.

Abstain: To hold oneself back voluntarily from doing something.

Acetic: Sour, sharp or acid in taste or character; sad and gloomy.

Acrimonious: Bitter and sharp in nature or tone; acerbic.

Admonish: To caution someone against a wrong action; to reprimand gently.

Adumbrate: To describe something in a vague or indirectly suggestive manner.

Adversarial: Aggressive, hostile and combative in attitude or behavior.

Affliction: A cause of distress or suffering; an illness or disability.

Affront: An act that insults or offends another person; an insult.

Aggravate: To make worse; to exacerbate a situation or condition.

Agonize: To cause intense physical, mental or emotional pain and distress.

Alienate: To cause someone to become unfriendly or hostile toward another.

Alienation: To cause someone to become unfriendly or hostile toward another.

Aloof: Being distant or uninterested in others.

Aloofness: Detachment and independence; a lack of emotional involvement.

Ambiguity: Having multiple interpretations; unclear or vague in meaning.

Ambivalent: Having mixed or conflicting feelings about something.

Amoral: Lacking a moral sense; unconcerned with the rightness or wrongness of something.

Anarchy: A state of disorder due to the absence of governmental authority.

Animosity: A deep seated feeling of ill will or hatred towards someone.

Anomalous: Deviating from what is normal or expected; unusual.

Antagonism: Open hostility, opposition or resistance to something.

Antisocial: Hostile or unfriendly towards society in general; not sociable.

Apathetic: Uninterested in and unmotivated by mundane matters; unresponsive.

Appalling: Causing shock and dismay due to its bad quality.

Apprehension: Fear or worry about something; a feeling of unease.

Arbitrary: Based on random choice or personal discretion rather than any reason or system.

Archaic: Belonging to a past age; outdated and old-fashioned.

Arid: Dry and barren; lacking in freshness, vitality or interest.

Arrogant: Having an exaggerated sense of one’s own importance.

Artifice: Deception or trickery used to achieve a goal.

Artificial: Not natural; produced or contrived by human beings.

Artless: Lacking any artifice or pretense; guileless and natural.

Asperity: Harshness or severity in disposition or manner; sharpness of temper.

Assail: To attack with strong criticism or verbal abuse.

Assailant: An attacker; someone who assaults another person verbally or physically.

Assailment: An attack; a forceful criticism or verbal assault.

Asunder: Into separate parts or pieces; apart from each other.

Atrophy: Gradual decline or deterioration; a wasting away of the body or mind.

Averse: Reluctant and disinclined to do something; having a strong dislike of something.

Aversion: A strong feeling of dislike or distaste towards something. 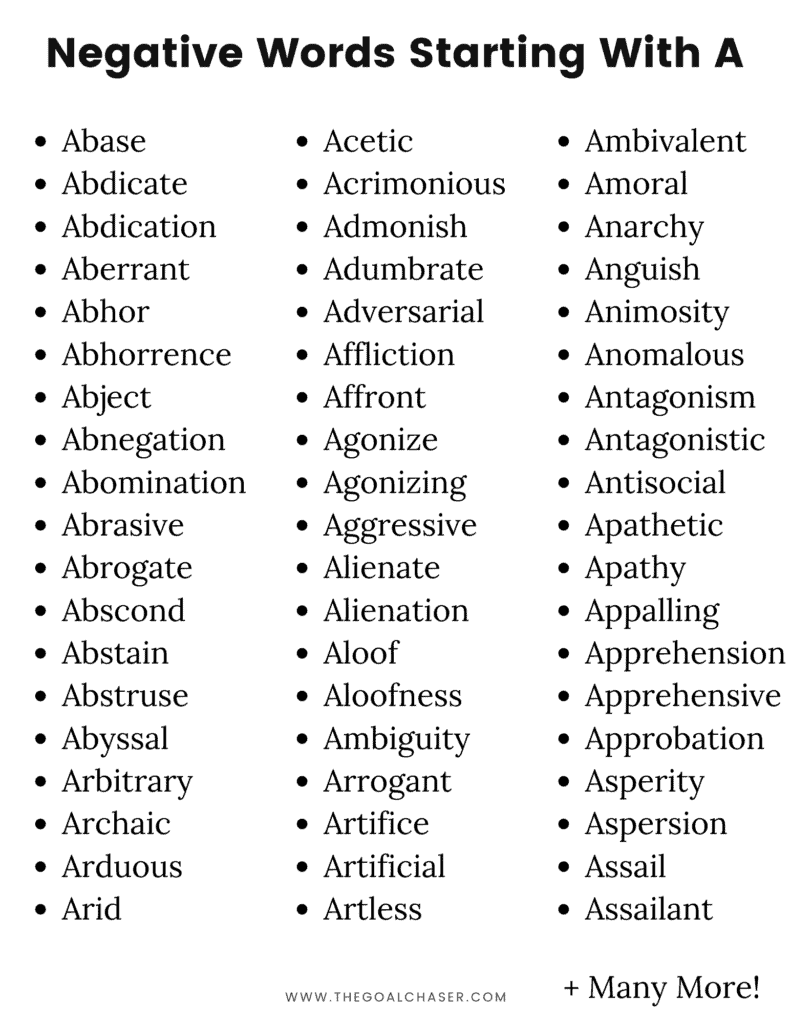 For more lists of negative or positive words, check out: