This collection of quotes about having different opinions to each other is encouraging and inspires acceptance and embracing differences.

What is a difference in opinion?

A difference of opinion is when two or more people have different opinions on something. An opinion is a belief, judgement or preconceived idea that is held by someone.

As we’ve all had different past experiences, it’s common that we will also hold different opinions to others.

Why is a difference of opinion a good thing?

It’s good to have differing opinions because it leads to better discussion and progress.

If everyone in the world thought exactly the same, there would be no conflict resolution, scientific discoveries, or technological advancements.

It is also good to have differences of opinions because it allows for more creativity. When people do not agree on things, they can try different ideas and see what works best. Sometimes having a difference in opinion helps both parties learn more about each other and themselves.

It’s important to note that difference of opinions is not the same as hate speech towards particular groups of individuals.

How Can Quotes About Different Opinions Help Us?

Having a different perspective from another person can help create new thoughts and ideas.

The following quotes about opinions can encourage an open, judgement free environment where different opinions can be explored further. 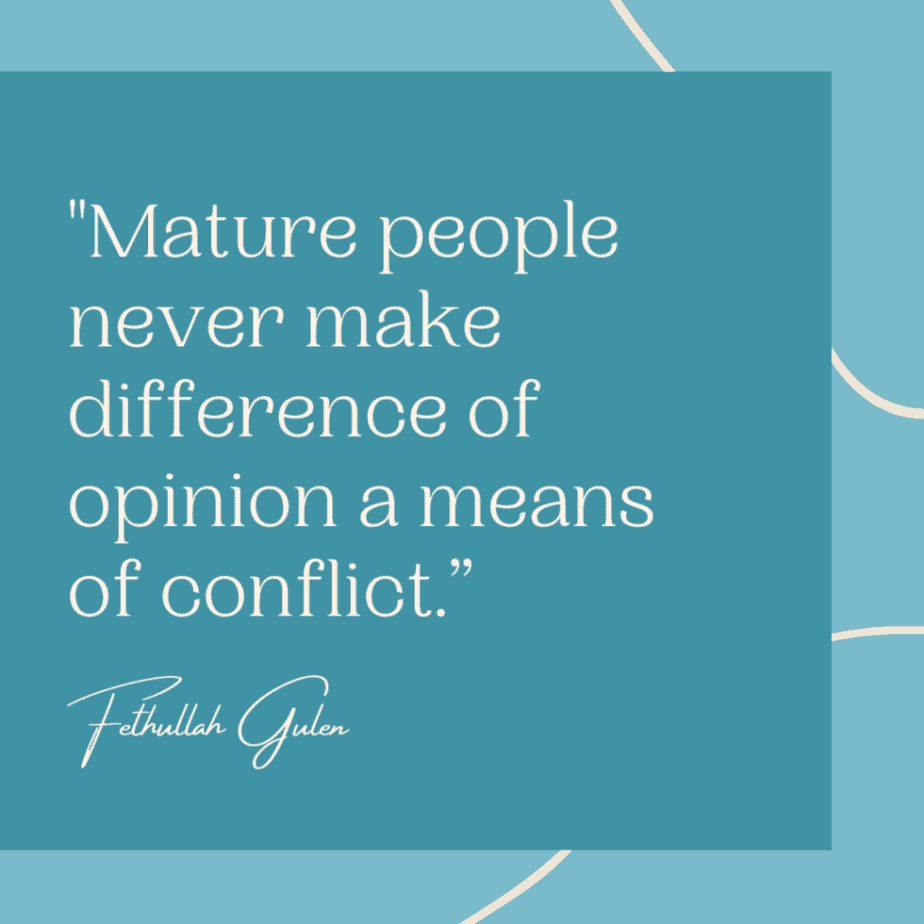 “I never considered a difference of opinion in politics, in religion, in philosophy, as cause for withdrawing from a friend.” Thomas Jefferson

“I’m a big believer in debate and difference of opinion.” Naomi Wolf

“There can be differences of opinion without there being personal differences.” Lynne Cheney

“Difference of opinion is the one crime which kings never forgive.” Ralph Waldo Emerson

“In every country where man is free to think and to speak, difference of opinion will arise from difference of perception, and the imperfection of reason; but these differences, when permitted, as in this happy country, to purify themselves by free discussion, are but as passing clouds overspreading our land transiently, and leaving our horizon more bright and serene.” Thomas Jefferson

“One of my beliefs about leadership is it’s not how many followers you have, but how many people you have with different opinions that you can bring together and try to be a good listener.” Robert Kraft

“I think that makes America wonderful, that we have different opinions.” Ainsley Earhardt

“I do think people of good will can have different opinions but still be coming not from a place of malice.” John Scalzi

“In the end, we all have our different levels of moral values.” Efrat Cybulkiewicz

“Words could betray you if you chose the wrong ones or mean less if you used too many. Jokes could be grandly miscalculated, or stories deemed boring, and I’d learned early on that my sense of humor and ideas about what sorts of things were fascinating didn’t exactly overlap with my friends’.” Robyn Schneider

“Honest differences of opinion should never be permitted to destroy a friendship.” Chaim Potok

“There’ll be differences of opinion in just about every intelligence analysis that you make.” Robert Mueller

“You see, a conflict always begins with an issue – a difference of opinion, an argument. But by the time it turns into a war, the issue doesn’t matter anymore, because now it’s about one thing and one thing only: how much each side hates the other.” Neal Shusterman

“Most of all, differences of opinion are opportunities for learning.” Terry Tempest Williams

“We dont think that we are in a quarrel with anybody. We may have a difference of opinion, but we’ll not allow such differences of opinion to grow into a problem that stands in the way of reconstructing the country and regaining the democratic path.” Rafik Hariri

“It is not best that we should all think alike; it is a difference of opinion that makes horse races.” Mark Twain

“Whenever you find yourself getting angry about a difference of opinion, be on your guard; you will probably find, on examination, that your belief is going beyond what the evidence warrants.” Bertrand Russell

Everyone Has Different Opinions Quotes

“Difference of opinion leads to inquiry, and inquiry to the truth.” Thomas Jefferson 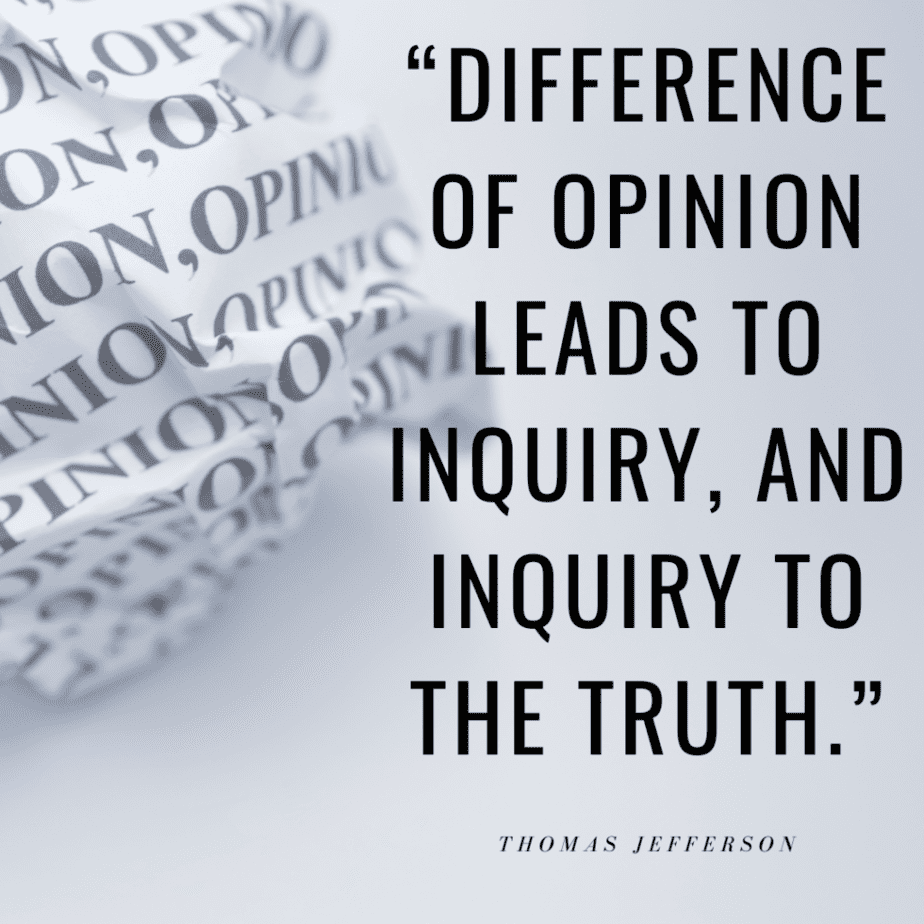 “I am not bothered what people say. You have always different opinions.” Aleksandar Mitrovic

“In a free society with a government based on reason, it is inevitable that there will be no uniform opinion about important issues. Those accustomed to suppression and control by governmental authority see this as leading only to chaos. But a government of the people requires difference of opinion in order to discover truth and to take advantage of the opportunity that only understanding brings.” Thomas Jefferson

“It’s okay to disagree with each other, what’s not okay is to hate each other because we disagree.” Abhijit Naskar

“Art thrives on a difference of opinion. My treasure is your junk, sort of thing. Life would be dull if we all agreed.” Robert Genn

“Wide differences of opinion in matters of religious, political, and social belief must exist if conscience and intellect alike are not to be stunted, if there is to be room for healthy growth.” Theodore Roosevelt

“If you have to say or do something controversial, aim so that people will hate that they love it and not love that they hate it.” Criss Jami

“If you’re going to have more than one person read your book, they’re going to have totally different opinions and responses. No person – no two people – read the same book.” Diana Gabaldon

“People have different opinions. That’s what Twitter is for.” Rylan Clark-Neal

“It used to be that we disagreed over the basic facts we were fighting over, and we had different opinions about them. Now I think we accept different sources of authority. … And people can establish credibility on their own say-so as long as nobody follows the trail and calls them out on it.” Rachel Maddow

“We meet aliens every day who have something to give us. They come in the form of people with different opinions.” William Shatner

Differences in opinions can become a problem when people are too stubborn to consider other views and perspectives. They can become closed off to other ideas, and this can cause tension with others and lead to arguments.

People who are close with each other should be able to respect different viewpoints and come to an agreement, even if it means agreeing to disagree.

For more inspirational quotes, be sure to check out: