Fear of failure has a lot to answer for.

It keeps people from their big hopes and dreams. It’s paralyzing and it’s destructive.

It makes you procrastinate, doubt yourself and stunts your growth.

Why Do We Fear Failure So Much?

We tend to think of failure as something shameful, humiliating and undesirable.

Understandably, failing at anything often causes negative feelings, no matter how big or small the failure actually is.

We also don’t want to look silly to those around us, waste money or waste time on something that doesn’t work out.

But mainly, we don’t want to look silly.

And the only way to overcome those feelings is by changing the way we understand failure – it is part of the process of success and leaves valuable lessons if we know how to learn from it.

To encourage you to shift your thinking about fear of failing, here are 26 powerful quotes – with a common theme – the only ‘silly’ thing is to let fear of failure get in your way!

Powerful Quotes About Fear of Failure

“The greatest mistake you can make in life is to be continually fearing you will make one.” Elbert Hubbard 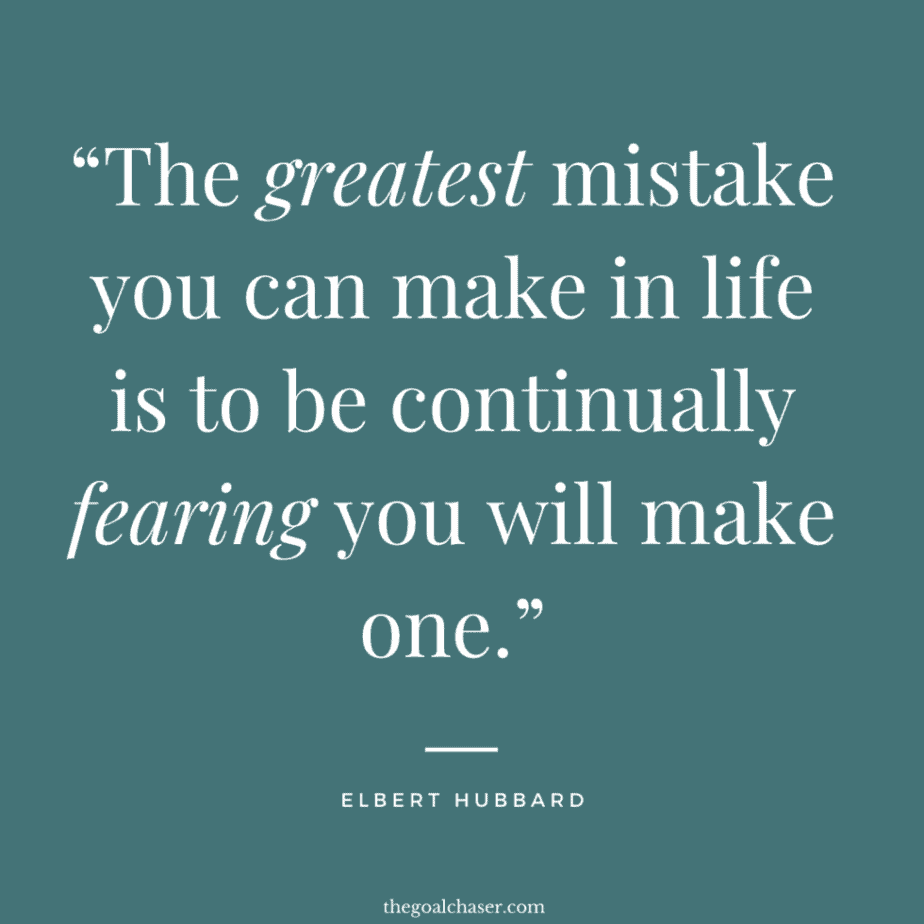 “Remember that failure is an event, not a person.” Zig Ziglar 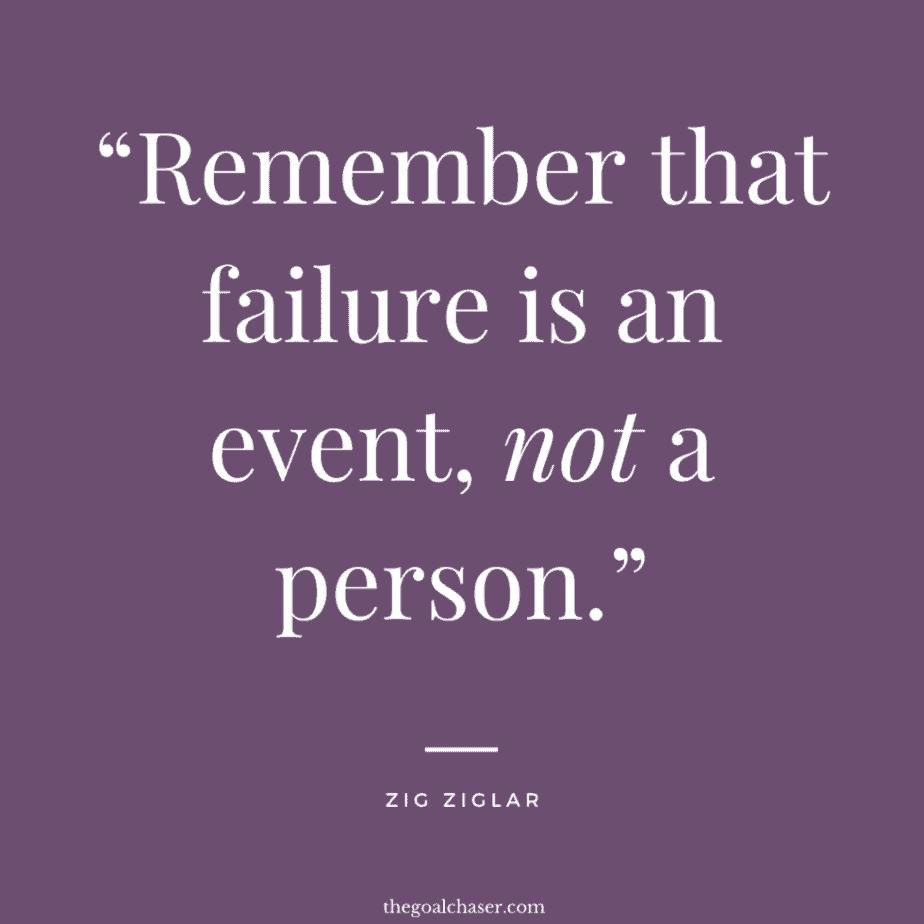 “Like success, failure is many things to many people. With positive mental attitude, failure is a learning experience, a rung on the ladder, a plateau at which to get your thoughts in order and prepare to try again.”  W. Clement Stone

“Failure is only the opportunity to begin again, only this time more wisely.” Henry Ford 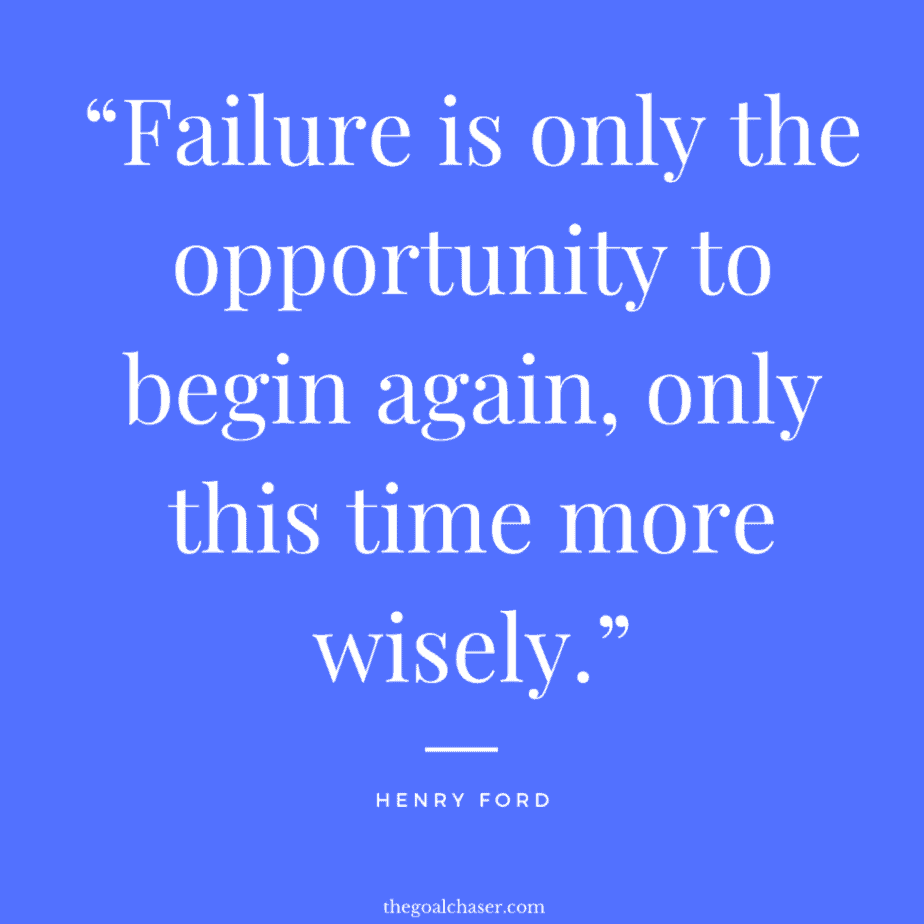 “Don’t fear failure. Not failure, but low aim, is the crime. In great attempts it is glorious even to fail.” Bruce Lee

“Many of life’s failures are people who did not realize how close they were to success when they gave up.” Thomas Edison 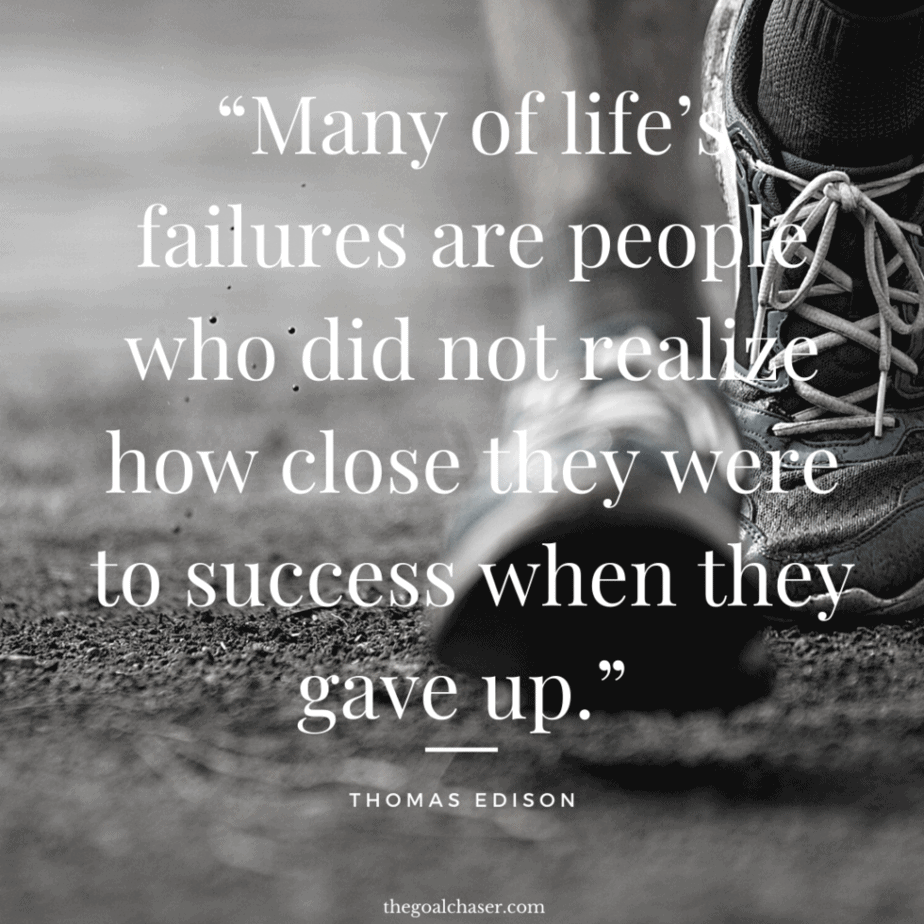 “Success is not final, failure is not fatal: it is the courage to continue that counts.” Winston Churchill

“The only real failure in life is not to be true to what one knows best.” Buddha

“Everything you want is on the other side of fear.” Jack Canfield

“Every adversity, every failure, every heartache carries with it the seed of an equal or greater benefit.” Napoleon Hill

“I’ve come to believe that all my past failure and frustrations were actually laying the foundation for the understandings that have created the new level of living I now enjoy.” Tony Robbins

“Our greatest glory is not in never failing, but in rising every time we fail.” Confucius 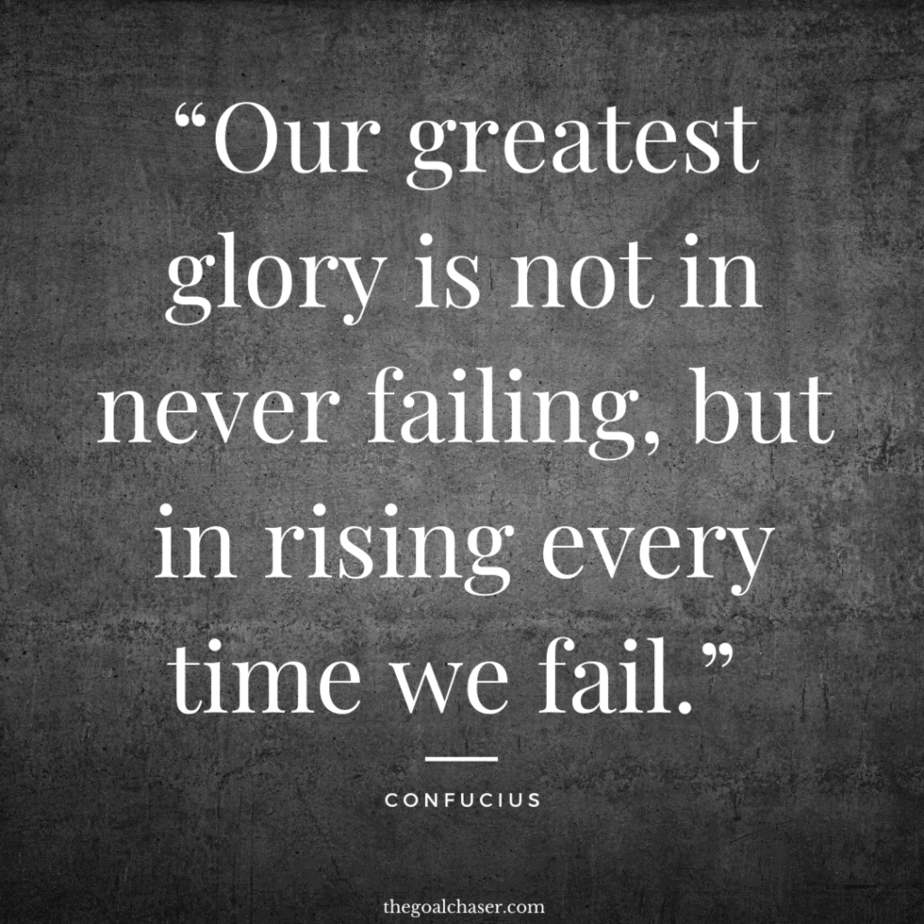 “He who is not courageous enough to take risks will accomplish nothing in life.” Muhammad Ali

“Failure is success if we learn from it.” Malcolm Forbes

“No human ever became interesting by not failing. The more you fail and recover and improve, the better you are as a person. Ever meet someone who’s always had everything work out for them with zero struggle? They usually have the depth of a puddle. Or they don’t exist.” Chris Hardwick

“There are no secrets to success. It is the result of preparation, hard work and learning from failure.” Colin Powell

“Failure is so important. We speak about success all the time. It is the ability to resist failure or use failure that often leads to greater success. I’ve met people who don’t want to try for fear of failing.” J.K. Rowling

“Why do I talk about the benefits of failure? Simply because failure meant a stripping away of the inessential. I stopped pretending to myself that I was anything other than what I was and began to direct all my energy into finishing the only work that mattered to me.” J.K. Rowling

“You have to be able to accept failure to get better.” Lebron James

“Only those who dare to fail greatly can ever achieve greatly.” Robert F. Kennedy

“The only real mistake is the one from which we learn nothing.” Henry Ford

“Giving up is the only sure way to fail.” Gena Showalter

“It’s not how far you fall, but how high you bounce that counts.” Zig Ziglar 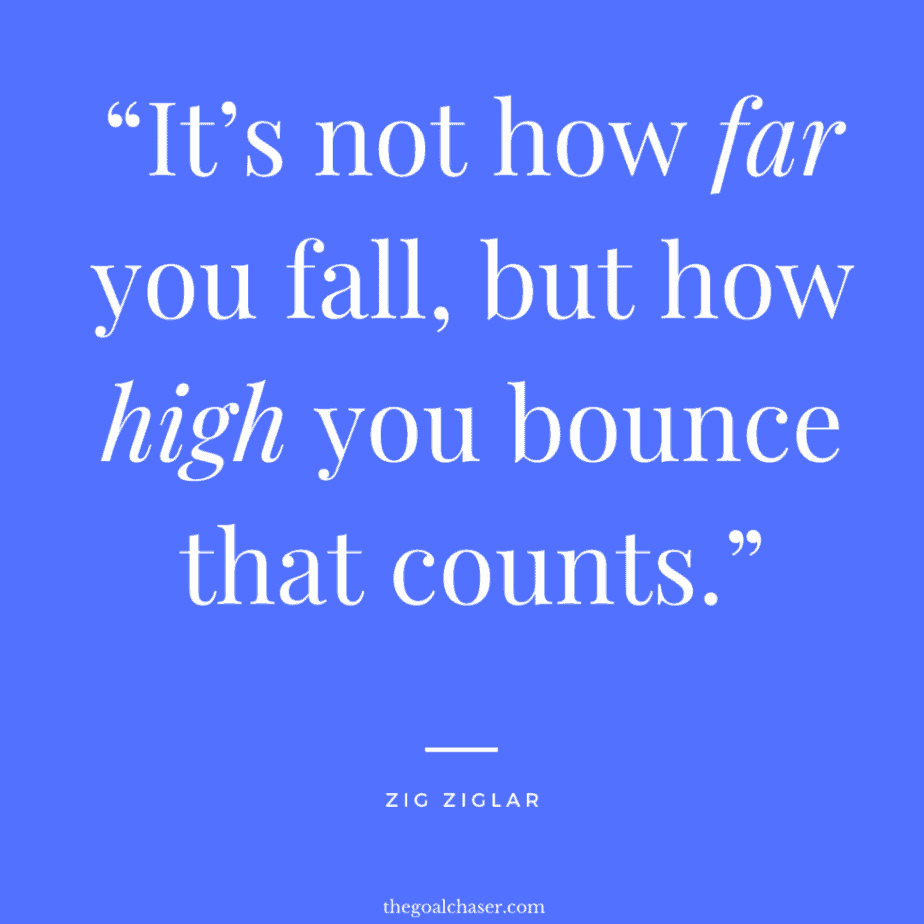 “Failure should be our teacher, not our undertaker. Failure is delay, not defeat. It is a temporary detour, not a dead end. Failure is something we can avoid only by saying nothing, doing nothing, and being nothing.”  Denis Waitley

“Failures are finger posts on the road to achievement.” C.S. Lewis 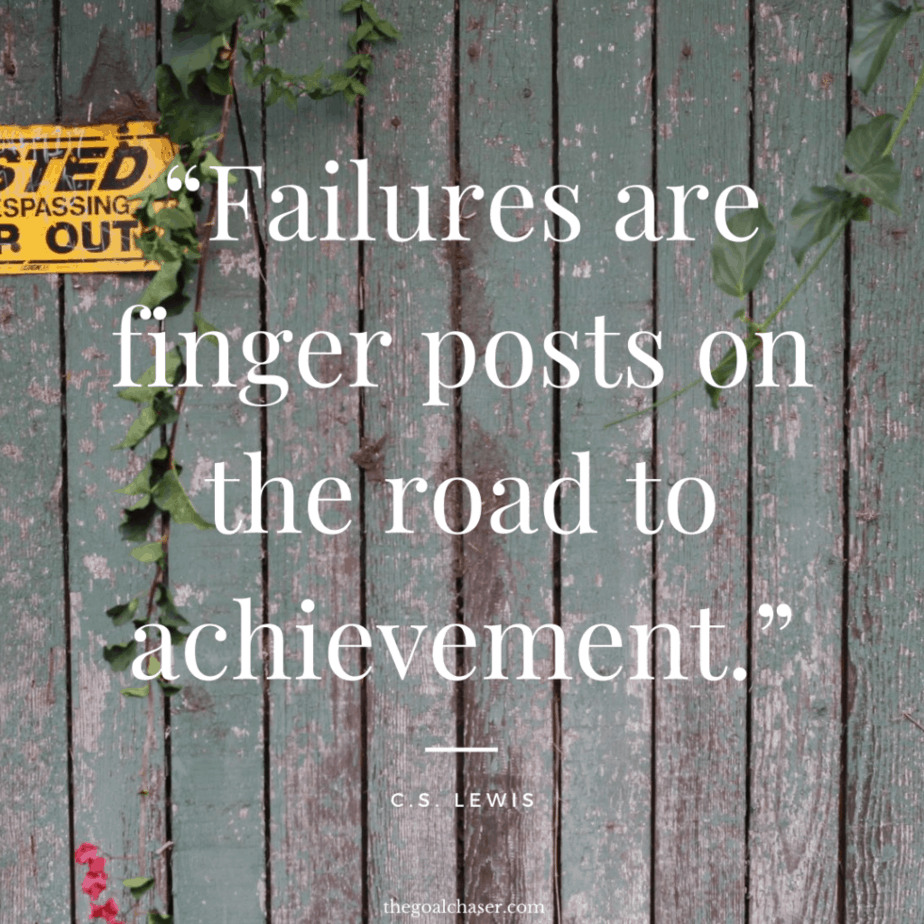 In summary, failure is not permanent. By learning to accept failure, analyzing its causes, learning from mistakes and pressing on, we can reshape how we think of it and therefore stop it from preventing us from achieving what we truly want to achieve in life.

Interested in reading more about fear of failure? Check out these related posts: