This collection of quotes on jealousy is a great way to remind us of the absurdity and wasted energy that jealousy creates.

Not saying it’s always easy to not be jealous of course, but a great reminder to shift our focus elsewhere instead.

Jealousy is a feeling of envy or resentment aroused by the prospect of another person’s advantages or successes.

It can be accompanied by a sense of inferiority, insecurity, and fear. Jealousy is often directed toward someone who has something that the jealous person wants, such as a partner, a job, money or an award.

Why are people jealous?

People feel jealous for different reasons and we all get the feeling from time to time.

Jealousy can also be caused by envy, which is a feeling of wanting what someone else has.

Ultimately though, jealousy is an emotion that is fuelled by insecurity and fear.

What are some quotes on jealousy?

Quotes about jealousy can help by providing some insight into this difficult emotion.

They can help to remind us that jealousy and envy are a product of our fears and insecurities and are detrimental to our relationships and mental health.

These insightful quotes about jealousy can also encourage us to shift our focus when we’re feeling jealous and to also ignore the jealousy we may be experiencing from haters. If funny quotes are more your thing, then check out these funny jealousy quotes for a laugh at how absurd and unfulfilling the emotion can be. 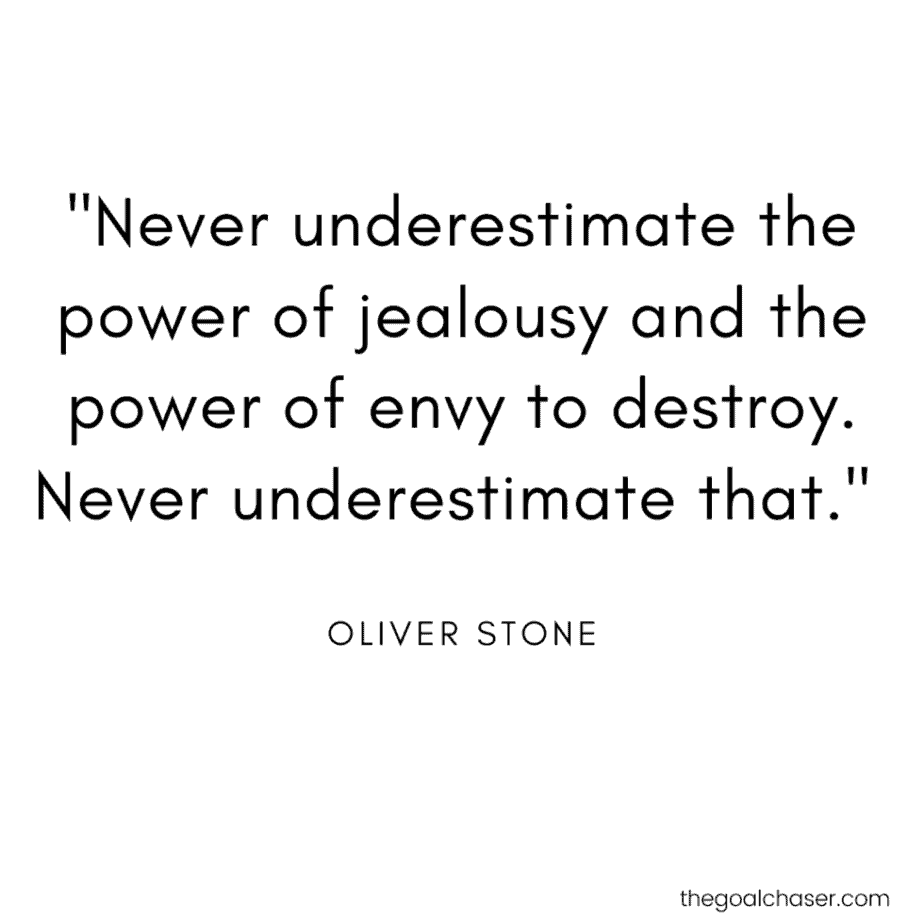 “Do not overrate what you have received, nor envy others. He who envies others does not obtain peace of mind.” Buddha

“Jealousy is the fear of comparison.” Max Frisch

“Envy shoots at others and wounds itself.” English Proverb 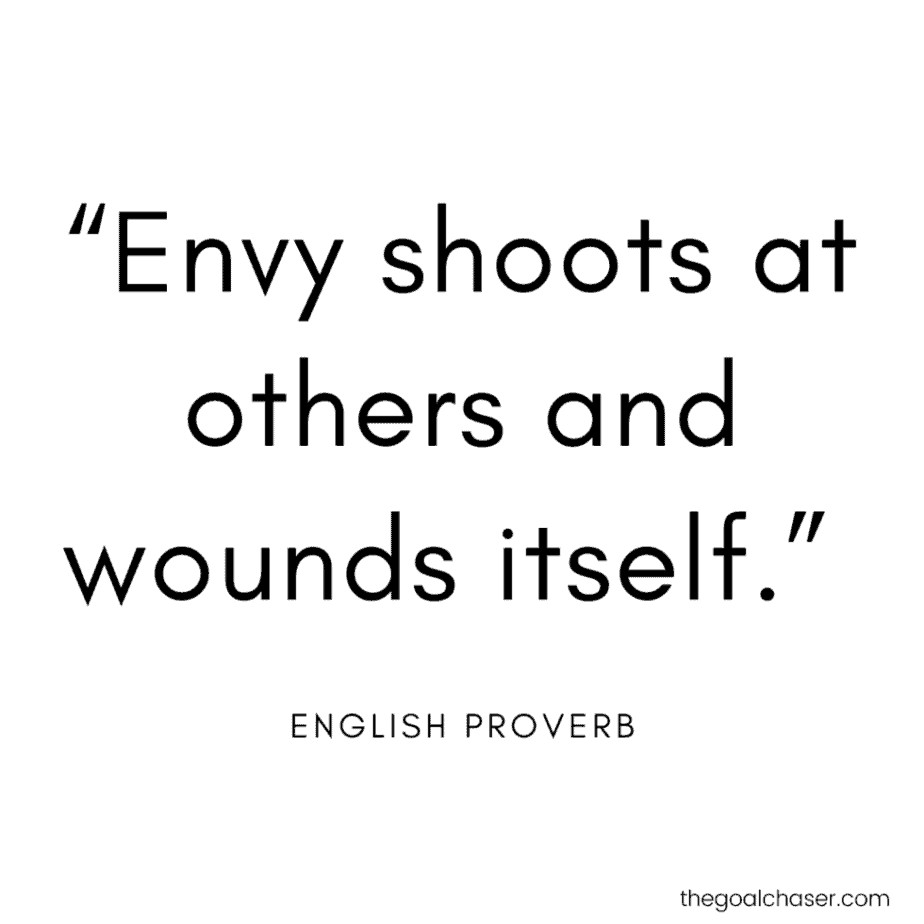 “To cure jealousy is to see it for what it is, a dissatisfaction with self.” Joan Didion

“If you’re jealous of someone else it simply means you have not come to a true acceptance and appreciation of yourself.” Rasheed Ogunlaru

“Resentment is like drinking poison and waiting for the other person to die.” Carrie Fisher 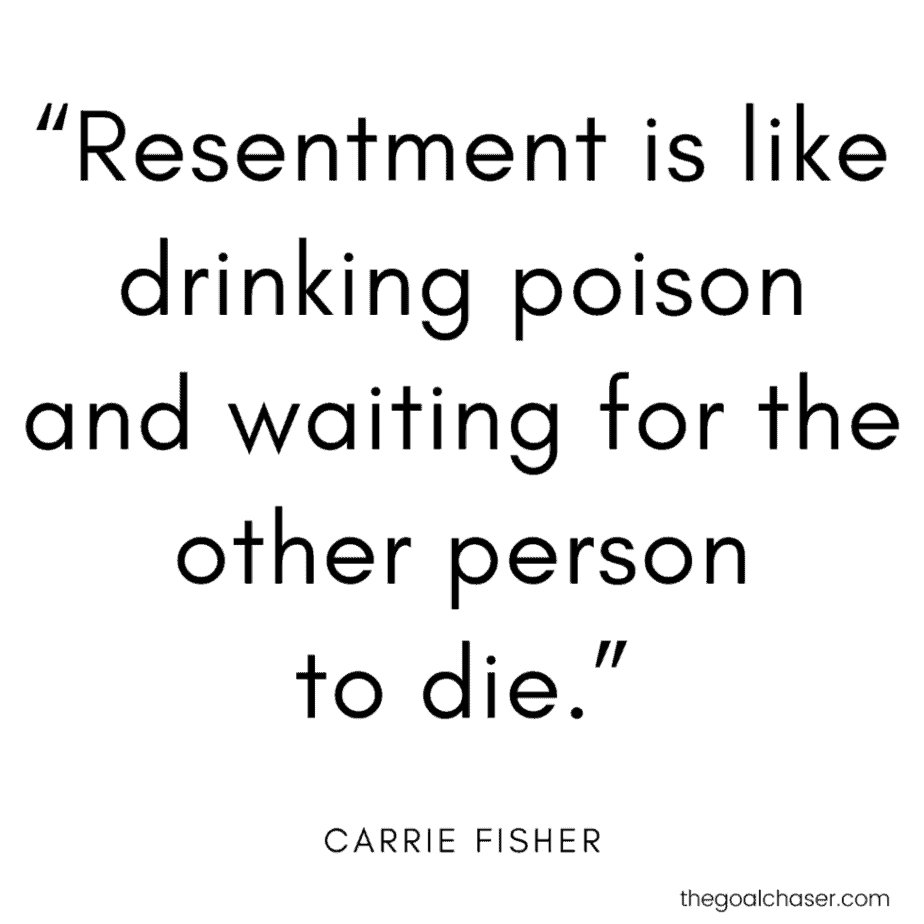 “Jealousy is both reasonable and belongs to reasonable men, while envy is base and belongs to the base, for the one makes himself get good things by jealousy, while the other does not allow his neighbour to have them through envy.” Aristotle

“Jealousy lives upon doubts. It becomes madness or ceases entirely as soon as we pass from doubt to certainty.” Francois de La Rochefoucauld

“The jealous are troublesome to others, but a torment to themselves.” William Penn

“I don’t want anything negative in my life, like hate, comparison, competition, and jealousy. I think these things are very heavy and take away from you the way of enjoying life.” Vivek Oberoi

“You can only be jealous of someone who has something you think you ought to have yourself.” Margaret Atwood

“A competent and self-confident person is incapable of jealousy in anything. Jealousy is invariably a symptom of neurotic insecurity.” Robert A. Heinlein

“As iron is eaten away by rust, so the envious are consumed by their own passion.” Antisthenes

“Jealousy… is a mental cancer.” B. C. Forbes

“The envious die not once, but as oft as the envied win applause.” Baltasar Gracian

“Like hatred, jealousy is forbidden by the laws of life because it is essentially destructive.” Alexis Carrel

“Jealousy would be far less torturous if we understood that love is a passion entirely unrelated to our merits.” Paul Eldridge

“Why do we feel jealousy? Therapists often regard the demon as a scar of childhood trauma or a symptom of a psychological problem. And it’s true that people who feel inadequate, insecure, or overly dependent tend to be more jealous than others.” Helen Fisher

“Sure, I can get a little bit jealous. The good part about jealousy is that it comes from passion. It’s also the dangerous part and it’s an ugly emotion that hurts.” Matthew McConaughey

“There is a sort of jealousy which needs very little fire; it is hardly a passion, but a blight bred in the cloudy, damp despondency of uneasy egoism.” George Eliot

“The surest route to breeding jealousy is to compare. Since jealousy comes from feeling less than another, comparisons only fan the fires.” Dorothy Corkille Briggs

“A lot of people get so hung up on what they can’t have that they don’t think for a second about whether they really want it.” Lionel Shriver

“Jealous, adj. Unduly concerned about the preservation of that which can be lost only if not worth keeping.” Ambrose Bierce

“People can do all kinds of things that maybe aren’t wise in hindsight because of jealousy.” Kristin Bauer van Straten

“Jealousy is the grave of affection.” Mary Baker Eddy

“Those who enjoy their own emotionally bad health and who habitually fill their own minds with the rank poisons of suspicion, jealousy and hatred, as a rule take umbrage at those who refuse to do likewise, and they find a perverted relief in trying to denigrate them.” Johannes Brahms

“Jealousy is bred in doubts. When those doubts change into certainties, then the passion either ceases or turns absolute madness.” Francois de La Rochefoucauld

“Fear is sort of like jealousy. It’s an unnecessary emotion.” Matt Skiba

“Jealousy is a disease, love is a healthy condition. The immature mind often mistakes one for the other, or assumes that the greater the love, the greater the jealousy – in fact, they are almost incompatible; one emotion hardly leaves room for the other.” Robert A. Heinlein

“That’s the way I got along in life. I don’t ever remember being particularly jealous of anybody, because I figured if I can’t do it myself, I don’t deserve to get it. “Clyde Tombaugh

“But I like not these great success of yours; for I know how jealous are the gods.” Herodotus

“There is no greater glory than love, nor any greater punishment than jealousy.” Lope de Vega

“Jealousy is a hell of a thing. There’s a reason it’s one of the deadly sins.” Chael Sonnen

“I have long believed that there are fundamentally two forces or emotions that drive our decisions – love and fear. Love has its many manifestations: compassion, gratitude, kindness, and joy. Fear often manifests in cynicism, anger, jealousy, and anxiety. I worry that many of our communities are being driven by fear.” Vivek Murthy

“There is something mean in human nature that prefers to think evil, that gives a willing ear and a ready welcome to calumny, a sort of jealousy of goodness and greatness and things of good report.” Richard Le Gallienne

“Jealousy is simply and clearly the fear that you do not have value. Jealousy scans for evidence to prove the point – that others will be preferred and rewarded more than you. There is only one alternative – self-value. If you cannot love yourself, you will not believe that you are loved. You will always think it’s a mistake or luck. Take your eyes off others and turn the scanner within. Find the seeds of your jealousy, clear the old voices and experiences. Put all the energy into building your personal and emotional security. Then you will be the one others envy, and you can remember the pain and reach out to them.” Jennifer James

For more inspiring words and quotes, be sure to check out: