Quotes by Thomas Paine remain relevant and are often quoted today due to their timeless wisdom. His words resonate with a modern-day audience as they provide insight into government, religion, politics, and democracy.

Paine’s quotes often contain valuable advice on how individuals can protect their freedoms and liberties in a world of ever-changing political climates. His words continue to be quoted in literature, speeches and other public forums as they can inspire people to fight for what is right.

Who Was Thomas Paine and What Was He Known For?

Thomas Paine (1737–1809) was an English-American political philosopher, author and revolutionary who is best known for his pamphlet ‘Common Sense’ as well as ‘The American Crisis’.

Paine wrote extensively on politics, economics and society in a variety of documents, including ‘Rights of Man’, ‘The Age of Reason’, and ‘Agrarian Justice’.

Paine’s writings had a monumental impact on the American Revolution. His works inspired colonists to declare their independence from Great Britain as well as influenced the Declaration of Independence itself. Paine also advocated for abolitionism and was a major proponent of the French Revolution.

Paine was an important figure in American and British political discourse, as his writings had a major impact on contemporary discussion of politics, society, and religion. He has been celebrated as one of the seminal figures in modern history who advanced democratic ideas and opposed autocracy, corruption, and government by the privileged few.

His legacy is still felt today as his writings have provided insight into the nature of democracy, participatory government, and individual liberty in a modern context. His works remain highly relevant and continue to be studied in universities around the world. 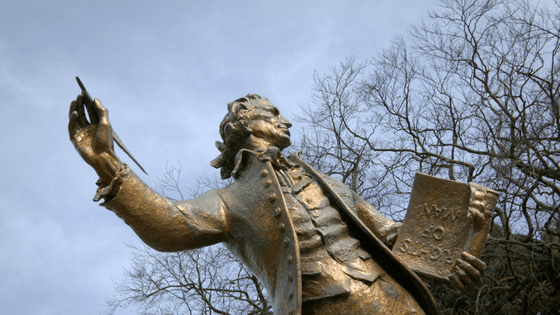 “The harder the conflict, the more glorious the triumph.” Thomas Paine

“A body of men holding themselves accountable to nobody ought not to be trusted by anybody.” Thomas Paine

“To argue with a person who has renounced the use of reason is like administering medicine to the dead.” Thomas Paine

“Human nature is not of itself vicious.” Thomas Paine

“He who dares not offend cannot be honest.” Thomas Paine

“That which we obtain too easily, we esteem too lightly.” Thomas Paine

“Reputation is what men and women think of us; character is what God and angels know of us.” Thomas Paine

“The greatest tyrannies are always perpetuated in the name of the noblest causes.” Thomas Paine

“An army of principles can penetrate where an army of soldiers cannot.” Thomas Paine

“There are two distinct classes of what are called thoughts: those that we produce in ourselves by reflection and the act of thinking and those that bolt into the mind of their own accord.” Thomas Paine

“Reason obeys itself; and ignorance submits to whatever is dictated to it.” Thomas Paine

“We can only reason from what is; we can reason on actualities, but not on possibilities.” Thomas Paine

“Character is much easier kept than recovered.” Thomas Paine

“A long habit of not thinking a thing wrong gives it a superficial appearance of being right.” Thomas Paine

“To establish any mode to abolish war, however advantageous it might be to Nations, would be to take from such Government the most lucrative of its branches.” Thomas Paine

“It is an affront to treat falsehood with complaisance.” Thomas Paine

“All national institutions of churches, whether Jewish, Christian or Turkish, appear to me no other than human inventions, set up to terrify and enslave mankind, and monopolize power and profit.” Thomas Paine

“Government, even in its best state, is but a necessary evil; in its worst state, an intolerable one.” Thomas Paine

“Every religion is good that teaches man to be good; and I know of none that instructs him to be bad.” Thomas Paine

“It is necessary to the happiness of man that he be mentally faithful to himself. Infidelity does not consist in believing, or in disbelieving, it consists in professing to believe what he does not believe.” Thomas Paine

“Every science has for its basis a system of principles as fixed and unalterable as those by which the universe is regulated and governed. Man cannot make principles; he can only discover them.” Thomas Paine

“Any system of religion that has anything in it that shocks the mind of a child, cannot be true.” Thomas Paine

“To argue with a man who has renounced the use and authority of reason, and whose philosophy consists in holding humanity in contempt, is like administering medicine to the dead, or endeavoring to convert an atheist by scripture.” Thomas Paine

“I love the man that can smile in trouble, that can gather strength from distress, and grow brave by reflection. ‘Tis the business of little minds to shrink, but he whose heart is firm, and whose conscience approves his conduct, will pursue his principles unto death.” Thomas Paine

“I prefer peace. But if trouble must come, let it come in my time, so that my children can live in peace.” Thomas Paine

“My mind is my own church.” Thomas Paine

“We have it in our power to begin the world over again.” Thomas Paine

“The World is my country, all mankind are my brethren, and to do good is my religion.” Thomas Paine

“He that would make his own liberty secure, must guard even his enemy from oppression; for if he violates this duty, he establishes a precedent that will reach to himself.” Thomas Paine

“My country is the world, and my religion is to do good.” Thomas Paine

“Those who want to reap the benefits of this great nation must bear the fatigue of supporting it.” Thomas Paine