The hurt we feel when someone has let us down, or repeatedly lets us down, is exhausting and disrespectful. Plus it straight out hurts.

Feeling let down by people is something that happens to everyone at some point in their lives. It’s normal to feel disappointed, hurt, and even angry when someone you care about doesn’t meet your expectations. But just because it’s common doesn’t mean it’s easy to deal with.

If you’re feeling let down by someone, it’s important to give yourself time to process your emotions and figure out what you want to do next. You might need to take a break from the person who let you down, or you might decide to confront them about what happened. Either way, it’s important to remember that you’re not alone and that there are people who care about you.

The following quotes help to articulate the feelings involved when we’re disappointed by others and to show how it’s more about them than you.

Quotes About Feeling Let Down

“I’m not upset that you lied to me, I’m upset that from now on I can’t believe you.” Friedrich Nietzsche 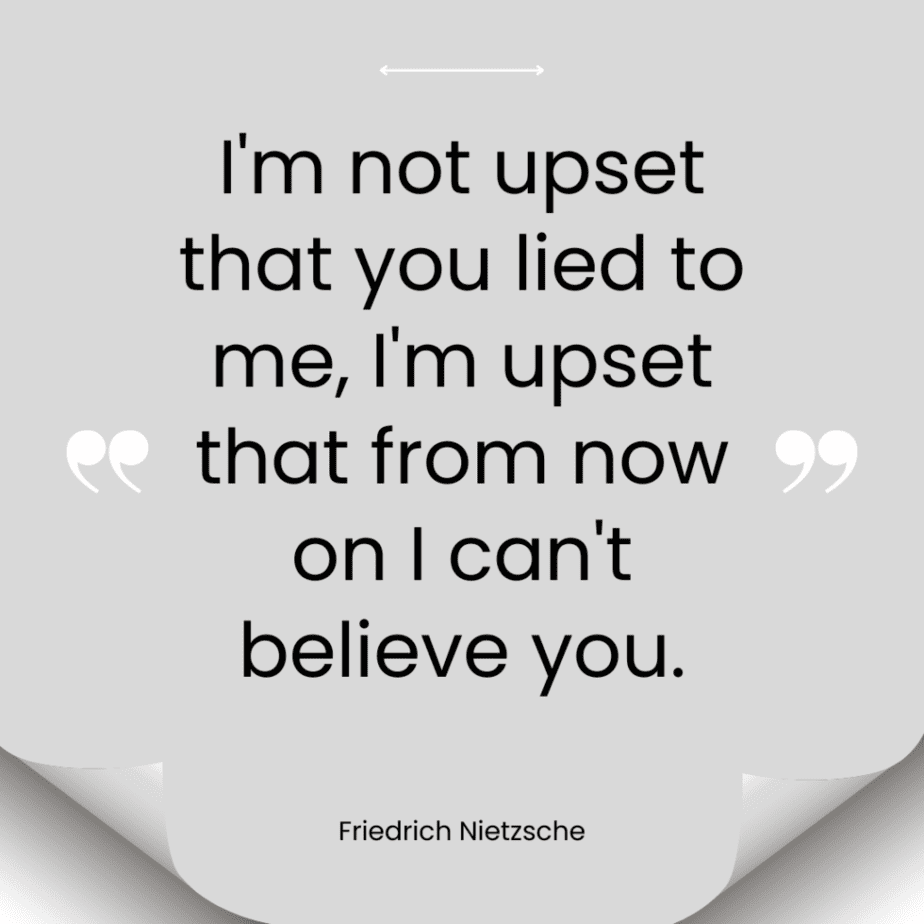 “When someone shows you who they are, believe them the first time.” Maya Angelou

“There is just so much hurt, disappointment, and oppression one can take… The line between reason and madness grows thinner.” Rosa Parks

“One of the greatest things I fear is letting down my people. I wouldn’t live with that type of conscience, of having let down my people after they’ve been brutalized for so long.” Winnie Madikizela-Mandela

“Assuming is the root of all disappointments.” Rogienel Reyes

“There are people in your life who’ve come and gone, they let you down and hurt your pride. Better put it all behind you, life goes on, you keep carrying that anger, it’ll eat you up inside.” Don Henley

“Depend on yourself; you won’t be let down.” Madhuri Dixit

“When you’re doing good, everybody praises you. But when everything’s all gone, a lot of people are nowhere to be found. So you always just believe in yourself, do it yourself and you won’t be let down.” Ginuwine

“In my experience, the biggest reason people struggle to get where they want to be is guilt. Guilt that they have let someone down, and also guilt that they are about to leave someone they love …behind.” Bethany Brookbank

“Disappointment is just the action of your brain readjusting itself to reality after discovering things are not the way you thought they were.” Brad Warner

“The importance we give our disappointment is what turns it into a tragedy.” Nitya Prakash

“Always trust strangers, it’s the people you know that let you down.” Andrew O’ Hagan

“The real promise in too many promises is a promise that I’m going to be disappointed.” Craig D. Lounsbrough

“Most things disappoint till you look deeper.” Graham Greene

“Accept the fact that some people didn’t intend to let you down. Their best is just less than you expected.” Thema Davis

“Sometimes when you get disappointment, it makes you stronger.” David Rudisha

“I can’t tell you the amounts of times I’ve been let down, but I still try to see the best in people.” Daphne Guinness

“There’s only so many times you can allow someone to let you down before you will no longer tolerate being disappointed. When things go wrong between two people, something has got to give. You get to the point where you get tired of being the only one trying to fix things, it’s not giving up, it’s realizing you had enough. You’ve got to do what’s right for you, even if it hurts.” Brigitte Nicole

“Disappointment is a sort of bankruptcy- the bankruptcy of a soul that expends too much in hope and expectation.” Eric Hoffer

“Disappointment is inevitable. But to become discouraged, there’s a choice I make.” Charles Stanely

“You will have to rise up and say, ‘I don’t care how hard this is, I don’t care how disappointed I am, I’m not going to let this get the best of me. I’m moving on with my life.” Joel Osteen

“If we will be quiet and ready enough, we shall find compensation in every disappointment.” Henry David Thoreau

For more inspirational and helpful quotes, be sure to check out: